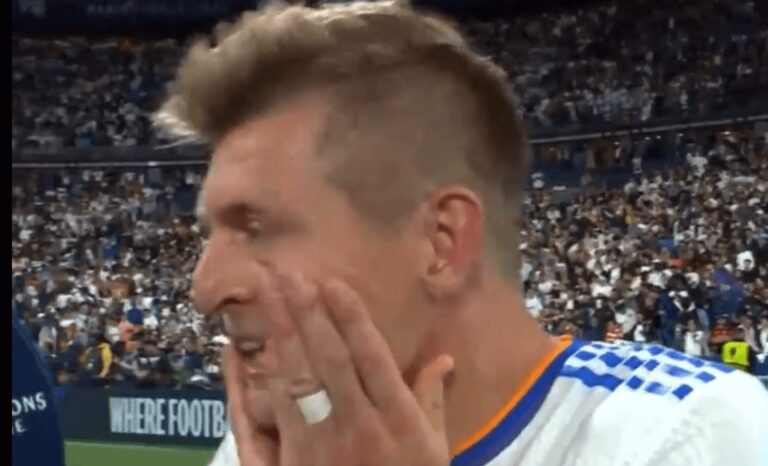 Real Madrid midfielder Toni Kroos was celebrating his side’s Champions League final victory over Liverpool last night – but that didn’t stop him taking issue with a German TV reporter during a post-match interview.

Kroos completed 90 minutes as Los Blancos sealed a 14th European Cup triumph. Vinicius Junior scored the game’s only goal for Carlo Ancelotti‘s side in their 1-0 win.

In fact, the Brazilian’s goal was Real’s only shot on target during the match. Instead, the Spanish giants focused primarily on their defensive play, which was exemplary throughout.

But most of the plaudits went to Thibaut Courtois in the Real Madrid goal. The 30-year-old made stunning saves from Mohamed Salah and Sadio Mane. In addition, he made a total of nine saves and was deservedly named the Player of the Match.

It was also a successful evening for Kroos. As per Sporting News, the German recorded the most touches of the ball (64) and most passes (57) of any player on the pitch in Paris.

However, that didn’t stop him from launching a verbal barrage at a German TV reporter after the game.

After the Champions League trophy was clinched, Kroos was invited to participate in an interview with German TV.

But the midfielder walked away after being asked two questions by the reporter.

According to a translated YouTube clip of the interview, one appeared to be whether Real Madrid took anything for granted in the final.

Then, the reporter asked whether he was surprised by Liverpool’s level of dominance over the Spanish giants. Jurgen Klopp‘s side had 23 shots, compared to Real’s three.

But Kroos fired back: “You had 90 minutes to think about sensible questions, honestly. Now you’re going to ask me two s**t questions like that. Two negative questions. You can tell right away that you’re German.”

The midfielder then refused to answer any more questions, and held his palm towards the reporter. Kroos then walked away to return to the celebrations.

The 30-year-old spent the early part of his professional career in Germany. He came through the Bayern Munich youth system, spending seven years there as a professional before moving to Real Madrid in 2014.