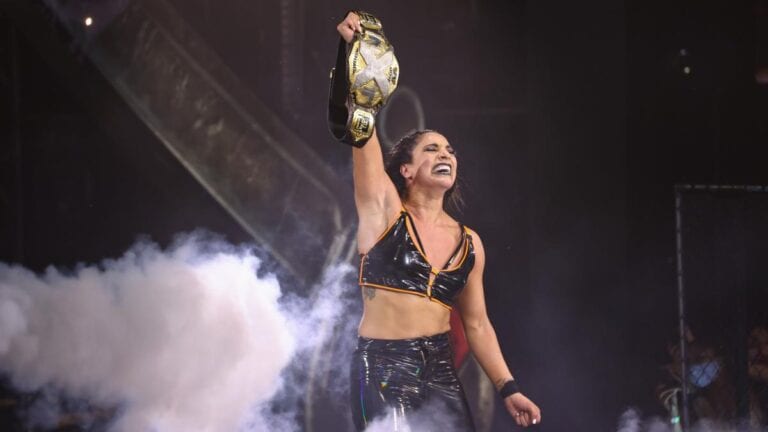 Inside The Ropes’ Gary Cassidy asked Triple H and Shawn Michaels about Raquel Gonzalez’s incredible journey in NXT, and why she was the right woman to end Io Shirai’s monumental almost-one-year-long reign as NXT Women’s Champion.

Triple H paid tribute to the new NXT Women’s Champion’s transition, labelling her a “star” who put herself into the position of ending Io Shirai’s incredible reign.

“For me, why Raquel Gonzalez is the right woman, right time? She’s got a presence. When you see her, it’s hard not to think she’s a star. It’s interesting that that’s all been within the last year, year and a half.

“When you look at the transition from her debuting with Dakota Kai to where she is right now, I mean, from stature to look, to physique, to just everything. She has capitalised on every second of every moment, transformed herself into an absolute star. And I think she’s just nicking the surface. So I think, “Why her?” Because she put herself in the position for it to be her for sure.”

Shawn Michaels added that he knew Gonzalez would be a star immediately, recalling seeing “two unbelievably beautiful, tall, strong women in all black” – with the other being Rhea Ripley, who will challenge Asuka for the RAW Women’s Championship at WrestleMania.

“It was two and a half years ago and I just happened to stroll into a coconut show in St. Petersburg. And there was this… I mean, two unbelievably beautiful, tall, strong women in all black. It was Raquel Gonzalez and Rhea Ripley standing there together and I remember just sitting there and looking at them and going, ‘Oh, my goodness, those two are going to be stars.’

“And it’s happened. Watching Rhea Ripley – homegrown. Right? She’s NXT through and through and I’ve had the opportunity to watch her grow into an incredible performer.”

“And the work ethic of Raquel Gonzalez is unparalleled. And so that’s why, from a personal standpoint, to watch her journey has been one of the most impressive and honestly feel good stories. You know, you love to watch people that work that hard get recognised for that.”

Gonzalez’s win is so impressive as Shirai had held the NXT Women’s Championship having defeated Charlotte Flair and Rhea Ripley in a Triple Threat Match at NXT TakeOver: In Your House back in June 2020.

Raquel Gonzalez has had an outstanding year, though, winning the first ever Women’s Dusty Rhodes Tag Team Classic alongside Dakota Kai and becoming the inaugural NXT Women’s Tag Team Champions. The powerhouse has capped off an dominant year with perhaps the ultimate accomplishment – ending the reign of one of NXT’s most dominant champions ever.

NXT TakeOver: Stand & Deliver Night 2 airs tonight via USA Network in the US and BT Sport in the UK, and streaming exclusively on Peacock in the US and on WWE Network everywhere else. Full results from Night 1 are available here.