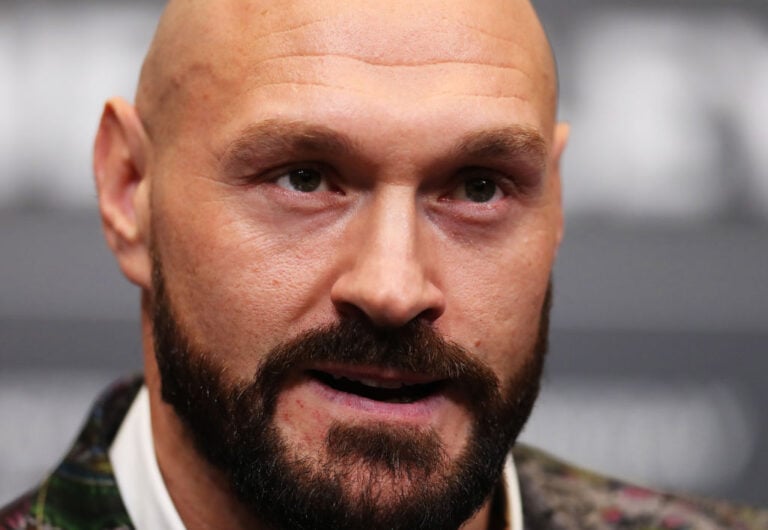 Tyson Fury is leaving no stone unturned in his preparation for his fight with Dillian Whyte, including sparring drug cheat Jarrell Miller.

On April 23, ‘The Gypsy King’ and ‘The Body Snatcher’ will go to war in one of the most significant bouts in British boxing history. But the build-up for the highly anticipated match-up has been strange, to say the least.

Since Frank Warren emerged victorious with a record-breaking purse bid, Whyte has refused to engage in any pre-fight antics.

The 33-year-old hasn’t made a squeak on social media, and more bizarrely, he didn’t even turn up to the press conference. His peculiar behaviour has fans questioning if the contest will happen. Off the back of winning his trilogy bout against Deontay Wilder, Fury wanted a unification bout with Oleksandr Usyk, but what he’s got instead is a domestic grudge match with a fighter unwilling to promote it.

Some Whyte fans are speculating that this is a stroke of genius. The WBC heavyweight champion thrives in the chaos of a hostile rivalry. But if he doesn’t have anybody to keep him motivated, he might not perform to his best. However, the noises coming out of Fury’s camp suggest that he’s still taking the bout very seriously.

Read: Tyson Fury net worth: How much has ‘The Gypsy King’ earned in boxing?

Securing the correct sparring partners to imitate your opponent’s style is one of the most vital parts of a successful training camp. And this is something Fury understands perfectly. He’s drafted in a plethora of talented heavyweights to get him as ready as possible for what Whyte will bring on April 23.

However, as necessary as this process is, fans may criticise Fury’s most recent decision. The Gypsy King has flown Miller in from the United States in a move that has shocked boxing enthusiasts around the globe. The 317-pound powerhouse is most famous for pushing Anthony Joshua at a New York press conference.

After emerging as a charismatic character on the mic and displaying his immense physical strength, Miller secured a monstrous collision with the former unified champion. And following their heated media day, fans eagerly awaited to see which man would prevail, but what happened next shocked the world.

In the space of one week, the 6 ft 4 beast tested positive for banned substances on three separate occasions. VADA discovered human growth hormone, GW501516 and EPO in his system, the last of which can only enter the human body via injection. This rendered any of his excuses irrelevant.

However, despite the scandalous nature of his offence, he only received a six-month ban. This was enough for him to miss out on fighting Joshua on the night he was ultimately dethroned by Andy Ruiz. However, it wasn’t enough to stop him from signing a lucrative deal with Top Rank.

This included a comeback fight against Jerry Forrest on July 9 2020. But before he even made it to the ring, he tested positive for GW501516 again. This time he received a two-year ban. Since the revelation of his offence, we’ve heard very little about the smack-talking American—until now.

The selection of the menacing heavyweight is a bizarre one, especially considering their past animosity. In 2019, Fury called his sparring partner out, revealing what had happened the last time they stepped in the ring.

He said: “This is a callout to the fat boy Jarrell Miller. Get yourself up here and bring $100,000 with you, and me and you will have a fight in the ring. [The] winner takes all, cash. I put you down seven times in Lancaster, Lancashire.

Although some might frown at Fury’s decision, Miller will undoubtedly help his preparation. The banned fighter lacks Whyte’s snapping jab or thunderous hooks, but he can replicate the Brit’s rugged aggression and physicality. And for a fight of such importance, Fury needs to be as prepared as possible.