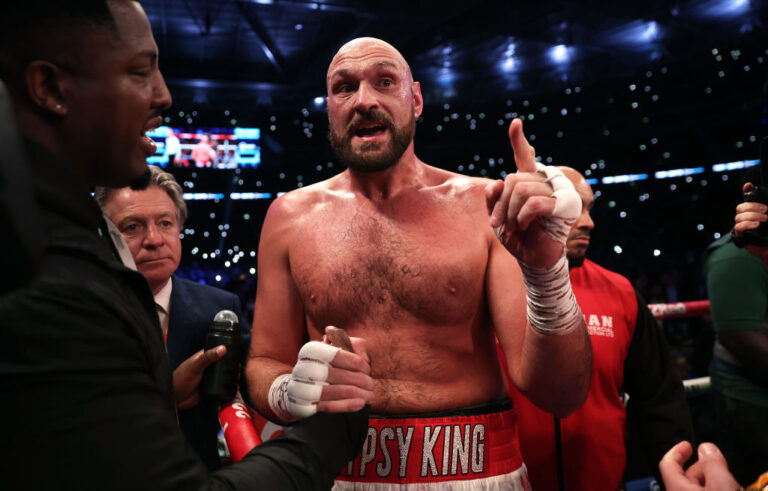 Tyson Fury may have ‘retired’ from professional boxing for now, but fans might see him back in the ring soon as he’s called out one of the biggest names in WWE history.

On April 23, ‘The Gypsy King’ produced a fantastic display of craftsmanship before unleashing a beautifully timed uppercut to render Dillian Whyte unconscious. The stunning finish left his fans in awe, and then he blew them away again with his rendition of ‘American Pie’.

But despite clearly having miles left in the tank, Fury decided to step away from the sport on top. However, with a plethora of big fights still out there for him and plenty of cash left on the table, we suspect the WBC champion won’t be able to resist the temptation for much longer.

The fans are still clamouring in their masses to see him take on the winner of the rematch between Oleksandr Usyk and Anthony Joshua. But in a recent interview alongside Frank Warren, he stated that it would take “£500 million” to get him back in the squared circle. However, that’s for a professional bout—an exhibition is a different story.

Following his emphatic win over ‘The Body Snatcher’, the heavyweight king invited UFC champion, Francis Ngannou, into the ring. But despite promising the crossover bout, other than asking the Cameroonian about the size of his manhood, the pair have flattered to deceive.

‘The Predator’ appears set to remain in MMA, so Fury has started his search for alternative opponents. And during an appearance on Good Morning Britain with hosts Richard Madeley and Susanna Reid, he revealed his new exhibition shortlist, which featured boxing legends and a wrestling superstar.

“This is not professional boxing. This is pure entertainment. Hollywood entertainment. Nothing more, nothing less. The difference is, the exhibition is you’re not there to win or lose. You’re there to enjoy, have a good time, and put on a show for the fans.

“You can fight old-timers, famous people, whoever you want. I’m looking at fighting Mike Tyson, Lennox Lewis, Frank Bruno, whoever. The Rock, Dwayne Johnson, that would be fantastic. You never know who we could be fighting on one of these shows. But that’s what I’m open to in the upcoming future.”

Regardless of whether there’s any animosity or not, a battle between Fury and The Rock would undoubtedly generate unbelievable publicity. Like it or not, it’d be one of the biggest collisions in boxing history.