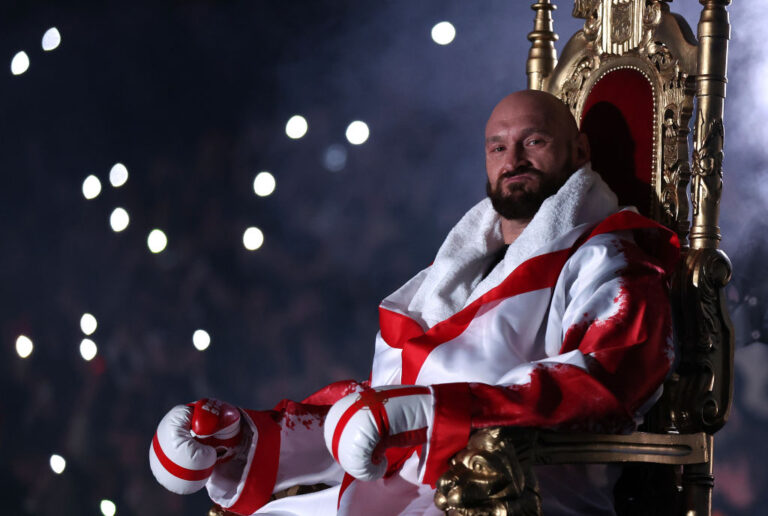 Becoming ‘the baddest man on the planet’ must mean a lot to Tyson Fury, but apparently, it doesn’t to his son, who still prefers Deontay Wilder.

In 2015, ‘The Gypsy King’ produced a masterful performance to relieve reigning champion Wladimir Klitschko of his heavyweight titles. However, after feeling underwhelmed by the achievement, he spiralled into depression.

Just a year removed from his crowning moment, he’d piled on a substantial amount of weight and developed dependencies on alcohol and drugs. But in a testament to his powers of self-belief, he used his relationship with God and his love for his family to push through the adversity.

He lost the weight, kicked the addictions and within three fights, stepped through the ropes against the heaviest puncher in boxing history, Deontay Wilder. And to the shock of those in attendance and the millions watching around the world, he schooled the American.

Although he had to rise from the ashes after a heavy knockdown in the twelfth round, everyone thought he’d done enough to get the win—except for the three judges at ringside. They scored it as a split draw. However, despite the controversy, Fury remained motivated and soon got his shot at redemption.

After a scandalous stalemate in the first fight, the Brit knew he needed a stoppage. He flew at his opponent, dropped him twice and forced Mark Breland to throw in the towel. Fury jumped on the ropes in celebration, but his work wasn’t done yet. He still had to face his rival one more time.

In their third and final collision, the two giants produced a battle for the ages. After surviving a first-round body attack, Fury had his man down in the fourth. However, this success made him take his eye off the ball.

It goes without saying that that’s a terrible idea when you’re in the ring with Wilder.

The fearsome puncher unleashed a brutal right hand which sent Fury crashing towards the canvas. He got up but quickly found himself on the deck again. However, he somehow used his powers of recovery to survive and eventually disposed of his man in the 11th.

In the WBC Champion’s next outing, he stopped Dillian Whyte in front of 94,000 passionate fans. He’s certainly come a long way from the man who got booed out of Manchester Arena for pulling out of the Klitschko rematch. Fury has completed a remarkable hero’s arc. Although he still has his demons, he’s in a good place and enjoys spending his time inspiring others to follow in his footsteps.

However, that all fades into irrelevance in the eyes of his son.

There’s no denying that the 6 ft 9 giant has an intimidating presence. But underneath his violent performances and excessive use of the word ‘dosser’ stands a family man with a heart of gold. He loves being a dad, but he received more than he bargained for while quizzing his son, Adonis.

Fury asked his boy a series of questions and discovered that his three-year-old wanted to box just like him. So naturally, the professional fighter asked which boxer he wanted to emulate.

A shocked Fury laughed off the situation and said: “No way, he’s a big dosser.”

Sometimes children are contrary in this way. For example, Michael Bisping’s son always picked against him, and Cristiano Ronaldo Jr can’t help but express his love for Lionel Messi. So we doubt the boxing icon will take this too seriously. After all, he got the last laugh over Wilder, not the other way round.

Despite sharing an epic trilogy, the pair have no relationship. But time is a healer, so perhaps they’ll find some common ground one day.