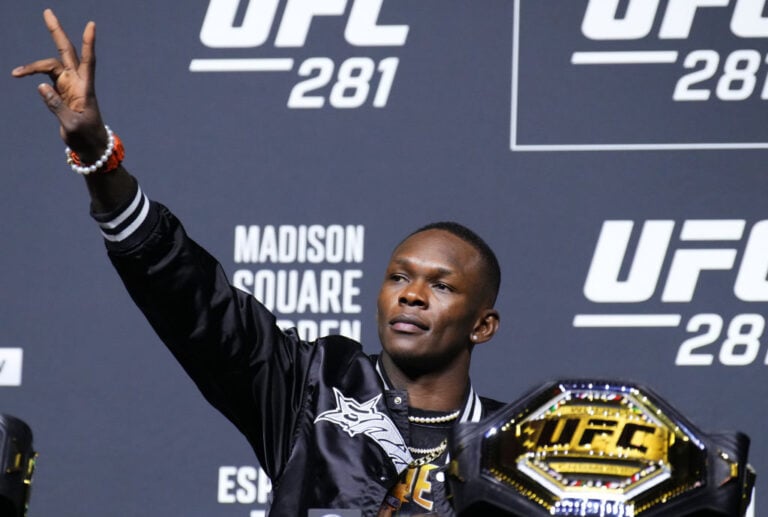 The iconic Madison Square Garden in New York City plays host to what promises to be a pulsating night of MMA action. So, here is the UK start time and everything else you need to catch UFC 281.

Headlining the weekend action is the return of reigning middleweight champ Israel Adesanya to the octagon. He will face off against Alex Pereira, with the Last Stylebender hoping to extend his three-fight win streak.

Meanwhile, UFC viewers will hope for a more entertaining match from Adesanya. The Nigerian received widespread criticism for his “boring” unanimous decision win over Jarod Cannonier in July.

However, fans will likely not be disappointed by the tantalising matchup between Dustin Poirier and Michael Chandler. The pair of lightweight stars will also do battle at UFC 281 in a fight that should be full of action. Poirier is looking to bounce back from his defeat to Charles Oliveira at UFC 269.

In contrast, Chandler comes into the fight looking to repeat his TKO victory over Tony Ferguson in May.

Additionally, as if there was not enough excitement for British UFC fans, there is a UK fighter on the card, too. Molly “meatball” McCann, #15 in the women’s flyweight division, takes on #12 ranked Erin Blanchfield at MSG this weekend.

The Liverpudlian is currently on a three-fight win streak, so will seek to maintain this run at UFC 281.

With all this to look forward to, what time does UFC 281 start for UK viewers?

Due to the event being held across the pond in New York City, UFC 281 makes for some late-night viewing on Saturday night (12 November).

The early prelims start at 11pm on Saturday. Following this, the prelims – featuring Molly McCann – should begin around 1am on Saturday night/Sunday morning.

Finally, the all-important main card is scheduled to start at 3am. However, this could be earlier or later depending on how quickly the UFC manages to fly through the rest of the fights.

How can I watch the event?

BT Sport is the British home of the UFC currently, showing both UFC Fight Nights and numbered events. Fortunately, there is no box office cost for this weekend’s action. But you will need a BT Sport subscription in order to watch the UFC 281 main card and prelims.

However, the prelims and early prelims are available to view on UFC Fightpass, if you want even more MMA matchups.

At the moment, BT offer a “Monthly Pass” for their sports package which costs £25 a month. There is no contract, therefore you can cancel it at any time.

Alternatively, UFC fans can watch Saturday night’s event via a range of other devices via the BT Sport app. If you do not want to stay up to watch live, the same app allows you to watch a full re-run of the event once it has finished. Happy days.

The Card in full