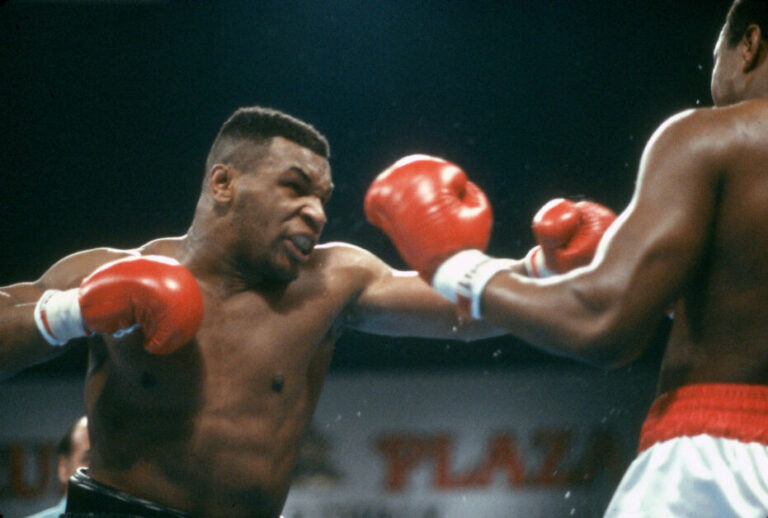 Mike Tyson firmly announced himself to the world in 1988 with an incredible victory over the legendary Larry Holmes.

In his prime ‘Iron Mike‘ was nothing short of absolutely terrifying. His dark aura and fearsome punch power made him into one of the most destructive forces in boxing history.

The Brooklyn native rose through the ranks at an alarming rate. He dispatched everyone in his path en route to becoming the youngest heavyweight world champion of all time at just 21 years of age.

Following his stunning victory over Trevor Berbick, he made four defences of his title, picking up every belt in his division in the process. He’d beaten the best in the world, but there was one test that Tyson had yet to face.

Even today, Larry Holmes is renowned as a sporting legend. His boxing IQ and laser-like jab made him a puzzle that few fighters could solve. The contest between himself and Tyson was a ‘dream match-up’ for boxing enthusiasts around the globe.

The build-up to the fight actually began many years prior. As a 14-year-old, Tyson watched his hero Muhammad Ali box Holmes at Caesars Palace in Las Vegas.

But the contest didn’t go the way the teenager would’ve wanted it to. His icon was picked apart and pulled out at the end of the tenth round. This enraged Tyson, who swore he would avenge Ali’s loss. Shortly after, he spoke to his idol on the phone to tell him his plan.

The 38-year-old former champion was retired when the rumours for a fight with Tyson began. But he was convinced to set foot back inside the squared circle.

If tensions weren’t already high enough, Ali sat ringside to watch the two sporting greats trade blows on the night. As always, he received a warm welcome from the crowd. The natural-born showman loved this. But just before the opening bell, he stopped joking and whispered something in Tyson’s ear.

He said: “Remember what you said – get him for me.”

Despite being past his best, Holmes was still expected to offer the younger man a stern test. But when the fight began, he rapidly unfolded.

Tyson was ferocious. His blend of speed and power was a far too deadly combination for his opponent to stop. He landed a frightening selection of hooks varying from head to body before a beautiful right hand detonated on Homes’ chin to send him crashing to the canvas. This left the sporting legend finished for the first time in his 75-fight career.

Tyson proved himself once again and redeemed his hero in the process. Ali must have been proud.

Where did he go next?

After his stunning win, Mike Tyson had the world at his feet. He’d transcended sports to become a pop-cultural sensation. The youngster made four more successful defences of his belt against quality opposition. Tyson stopped Tony Tubbs, Michael Spinks, Frank Bruno and Carl Williams. However, like many fighters, he took his eye off the ball in the end.

He fought James ‘Buster’ Douglas at the Tokyo Dome in Japan in a contest that was meant to be a given. His adversary was a 40/1 underdog. But in a monumental upset, he stopped Tyson in one of the biggest shocks in sporting history.

Read: Five of the worst ends to fight careers

He eventually recovered from the embarrassment and went on to reclaim the accolade of ‘The Baddest Man on the Planet’. Despite some losses towards the end of his career, he’s still regarded as one of the greatest fighters of all time.