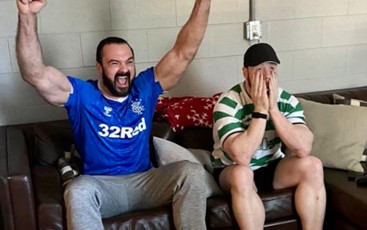 Rangers have a famous fan in their ranks, thanks to none other than WWE star Drew McIntyre. But why does he support The Gers?

Currently, McIntyre – real name Andrew McLean Galloway – is gearing up for an intense showdown with Roman Reigns at Clash at the Castle. Tomorrow’s headline match at the Principality Stadium in Cardiff promises to be an unmissable event for UK wrestling fans.

Additionally, it proves a chance for McIntyre to grab the coveted WWE Universal champion belt in front of a “hometown”, British crowd. As the local-ish hero, McIntyre has been doing plenty of media work this week.

This included a trip to Sky Sports, where the WWE star was able to discuss his favourite team, Rangers.

After discussing the Glasgow side’s transfer window, where McIntyre threatened to “smash” Leeds if they sign Ryan Kent, the Scottish giant received a tricky question.

Would he rather win the undisputed WWE title for the third time, or Rangers beat Celtic this weekend?

“Ah, come on,” said McIntyre, via Sky Sports. “It’s an important game, you know. Celtic are top right now. I know they’ve won every game. We drew with Hibs the other day, and whoever wins this goes top.

“But I’ve got to say win the title! This is something I’ve dreamt of as a kid. Like, main event, in the first stadium show in thirty years. Everyone told me I was mental to go to America for WWE. Then I became the first-ever UK champion. Now, I have the chance to raise the title in front of everybody back home in the UK. So, I’ve really got to go for that one.

“Still, Rangers are going to win, so we’re golden!”

Clearly, Drew’s blood runs blue for The Gers. But how did he choose them over bitter rivals Celtic?

Why McIntyre supports The Gers

Despite hailing from Ayr, a town 37 miles from Glasgow, McIntyre decided against supporting his true hometown club. Ayr United are in the Scottish Championship, although could soon be promoted to the SPL.

That is because McIntyre instead comes from a family divided between Rangers and Celtic. As a result, the Galloway clan allow their children to pick sides at infancy.

In an interview with BBC Sport a few years ago, McIntyre detailed the simple method of choosing.

“My family supports Rangers and Celtic, and, when you are a baby, they leave out the two tops, and you crawl towards one of them,” he said, via HITC. “I believe I crawled to the Rangers top when I was a kid.”

It has been a strong love affair between the WWE star and Rangers since then. His passion for the club is even stronger than his work, too. Last season, when the Scottish side reached the Europa League final, McIntyre humorously tweeted to WWE management.

McIntyre will hope for a double dose of happiness this Saturday – an Old Firm win for Rangers, and an Undisputed WWE Universal Championship win for himself.