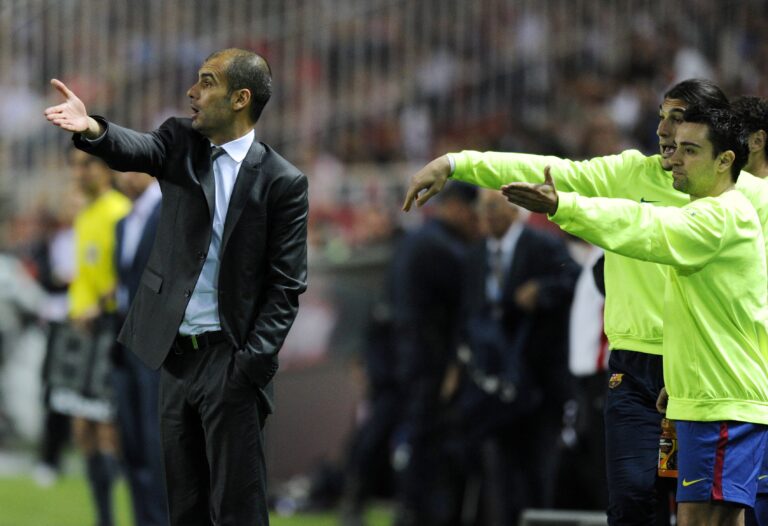 Xavi Hernandez became the new coach of Barcelona on Monday. He is the latest manager to have returned to the club after previously playing there.

The previous incumbent, Ronald Koeman, played for the club between 1989 and 1995, winning four LaLiga titles and the European Cup in 1991/92.

Before Koeman’s arrival, Luis Enrique and Ernesto Valverde had spells in charge. Both men also played for the club.

Then there was, of course, Pep Guardiola. After coming through the famed La Masia youth system, the Spaniard spent much of his professional career at Barcelona. From there, he spent 11 years as part of Barca’s senior squad. Guardiola spent time as club captain and won an incredible 15 domestic trophies during those 11 years.

The comparisons to Xavi, then, are apparent. Both men played in the heart of midfield at Barcelona. For a short time, they played on the same side. They both went to achieve great things with the club. Both can now say they have managed the club.

Those comparisons, ultimately, have to end there for the time being.

Xavi will hope to emulate that level of success in time at Barcelona. But here’s why, although there are notable similarities, Xavi won’t be a regen of Pep Guardiola:

Pep Guardiola was appointed as the manager of Barcelona shortly after guiding the club’s B team to promotion from the Spanish third division.

Current Leeds boss Marcelo Bielsa has been a significant influence on Guardiola’s managerial career. The Spaniard met Bielsa in Argentina in October 2006, nine months before taking charge of Barcelona B.

As per The Guardian, Guardiola told a friend following the meeting: “I’ve just met the person who knows the most about football.”

Xavi’s coaching background has been different. Immediately following his retirement from playing, the midfielder took charge at Al Sadd, having previously gained experience managing the club’s under-23 side.

There are some similarities, however. In an interview with FourFourTwo, Xavi cited his coaching inspirations as Guardiola and Luis Aragones. Aragones coached the Spain national team between 2004 and 2008, winning the European Championships in the latter year.

The state of Barcelona

Without a doubt, Xavi is walking into a different Barcelona to the one Pep Guardiola inherited in 2008.

Although Barcelona had finished third in La Liga in the disastrous final season of Frank Rijkaard’s reign, the side had enough quality.

It is true that Guardiola completed a rebuild job that summer, with Ronaldinho, Deco, Gianluca Zambrotta and Oleguer all departing. But Lionel Messi, Samuel Eto’o, Xavi himself and Andres Iniesta were just some of the top names at the club.

There were changes at the club last summer too. With Barcelona’s financial situation looking exceptionally bleak, Messi, Antoine Griezmann and several others all left the club. It was only due to agreed pay cuts from existing players that Barca could register new signings Sergio Aguero, Eric Garcia and Memphis Depay.

There’s still undoubted talent in the squad, and several promising La Masia youngsters are emerging. But it’ll take time to return to the dominating Barcelona of old.

One difference between Xavi and Pep Guardiola is the way they set up their teams.

Throughout most of his career, Guardiola has operated with a 4-3-3 formation, with full-backs cutting inside to almost act as secondary central midfielders.

Xavi’s tactical style at Al Sadd has less of a reliance on full-backs. He operates advanced wingers in a 3-4-3 or 3-5-2 shape.

But he emphasises high pressure with his teams, hence the number of players that surge forwards.

The concern with such a style is the tendency to concede goals. Al Sadd were leaky. In their last seven games, they have conceded two goals or more on three occasions. At the other end, though, they have scored 36 goals in nine games this season.

Speaking to The Coaches’ Voice last month, Xavi explored his own playing style – and there are some similarities to Guardiola. He explained how he likes his sides to create numerical superiority in attacking areas and dominate possession in the opposing half.

There are similarities between the pair, then, but also several differences. Xavi’s journey at Barca will receive many comparisons over the coming months.