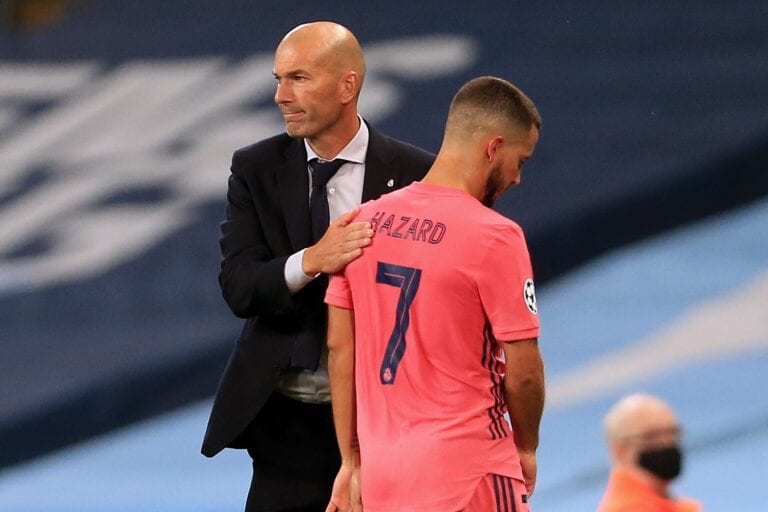 The Bernabeu era has been a turbulent one for Hazard to say the least. The Belgian has been forced to remain on the sidelines for the majority of his time at Madrid with many believing his tenure there is cursed.

His fitness issues have become something of a mystery and so far no one seems to have a definitive answer to the problem, including Madrid manager Zidane.

Hazard made another return from injury during the club’s 2-1 win over Elche this past weekend before missing training on Monday. When questioned about the situation before his side’s crucial Champions League second leg against Atalanta, Zidane himself seemed pretty confused.

“He won’t be in a condition to be with us,” Zidane said at a press conference ahead of Tuesday’s game. “I can’t say more. There are things I can’t explain… I hope, because I’m always positive, that it isn’t too much.”

“Something is going on. He’s a player who had never been injured in his career, or not many times. It’s new for him. I can’t explain more. We want him to be well, we want to help, and I hope he’ll be with us again soon.”

“The fans will have to wait,” Zidane added. “We know the player he is. We want to see Eden Hazard play — the club, the players, the coach, the staff — but right now he can’t do what he wants to do. We’ll be patient.”

During his time at Chelsea Eden Hazard proved himself as one of the best players in world football, but he just hasn’t been able to get out of the blocks in Spain. At this stage, just getting a consistent run of games under his belt will be a welcome development.