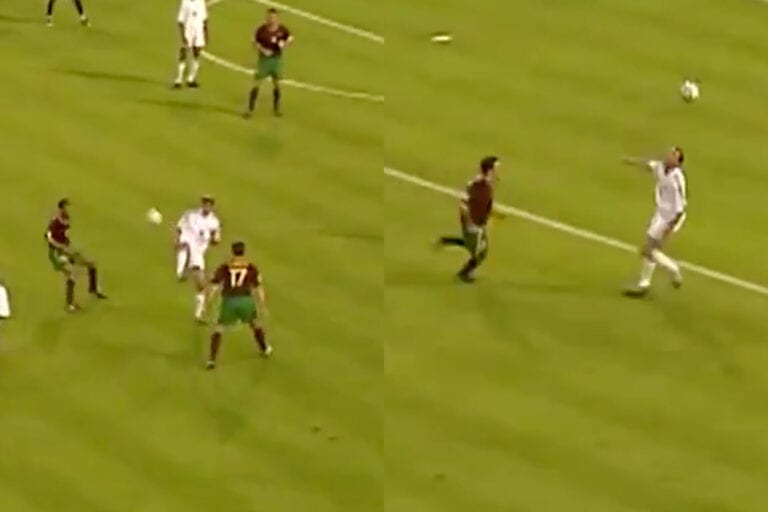 For substantial periods between the mid-1990s and 2000s, Zinedine Zidane was one of, if not the best footballer on the planet.

He won the Champions League, LaLiga, Serie A, Super Cup and Intercontinental Cup during spells with Juventus and Real Madrid.

On the international stage, he helped France to win both the 1998 World Cup and Euro 2000.

In a clip originally posted in 2019, UEFA celebrated one of Zidane’s finest performances in international competition. The match in question was when France defeated Portugal in the semi-finals in Euro 2000.

The Frenchman was at his sparkling best that day, showing off his expert close control, neat touches, strength and slick combinations with team-mates. He was simply unstoppable.

At one point, he is seen nonchalantly flicking the ball up on the volley, straight to the feet of team-mate Emmanuel Petit.

One driving run sees him float past several Portuguese defenders, before laying the ball off to a team-mate.

Then came the inch-perfect control of a Petit long ball and subsequent cross, which was narrowly missed by Sylvain Wiltord.

Zidane then capped off his own individual performance by scoring an 117th-minute penalty to make the score 2-1, and send France through to the final on the golden goal rule.

It was certainly a truly memorable display from the midfield legend.

He would help France to win the final of what is considered to be one of the greatest European Championships of history. David Trezeguet was the man to score the golden goal in a 2-1 win over Italy.