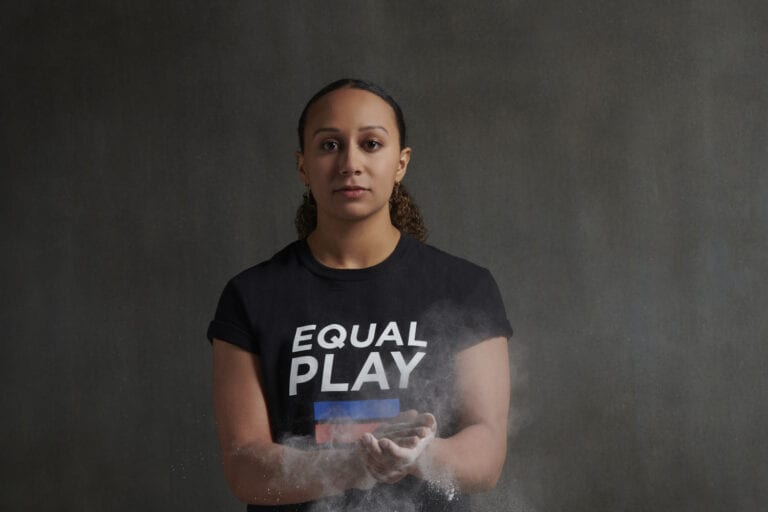 The initiative runs for four years, aiming to close the gender pay gap and make sport more inclusive for Women. It seeks to level the playing field and to accelerate diversity, inclusivity and equality in sports and fitness.

Sports Direct have provided Smith with her own home gym to give her the best possible chance to get to Tokyo and battle for gold.

Smith, who appeared in the 2012 Olympics says it is very special to be involved in such a huge campaign.

“It is really exciting to actually be involved in this. It is a real honour to be asked. I do a traditionally masculine sport. People always say they don’t expect to see a Female weightlifter, we do exist. It’s something that has followed me around so it is something that I am keen to push.”

Equal Play seeks to unlock the hidden potential in women up and down the country who haven’t always had the chance to play sports.

Smith’s focus hasn’t always been on weightlifting, and her journey to the olympics was by no means the ‘standard’ one.

“I did gymnastics probably from six to 12 years old. I moved to a different club just because it was more convenient to get to, and it happened to have a weightlifting gym and other sports as well.

“I was never that good of a gymnast so they said how they would like me to consider trying some weightlifting. It was just kind of a hook line because they wanted me in the gym downstairs because they needed someone for the London Youth Games.

“I don’t know if it is still the same now but back then you needed two boys and a girl – and obviously weightlifting had very few girls in it. So they essentially used the gymnastics gym upstairs as a female weightlifter recruitment ground.

“I just happened to be pulled out of my gymnastics class and went down to the weightlifting gym and I loved it more than I ever loved gymnastics. I just vibed with it a bit more.”

The 27-year old appeared at the London Olympics at just 18 but didn’t realise how big of a deal the games were at the time, and how big of an impact they could have on her career.

“I was 18 at the time so I had been lifting for six years at that point. I was still very young and in a way I think that the naivety of youth, I didn’t realise how big of a deal it was at the time.

“Of course it was fantastic, competing in front of a home crowd. That is something that I’m hoping to do again by competing at the Commonwealth games in Birmingham next year, so that will be another amazing home crowd.

“There is something special about competing in your hometown just over the river from where you grew up. I almost wish I had a bit more experience under my belt to sort of appreciate how big of a deal it was at the time.”

The Olympics always leaves a lasting impression on a country and London was no different. The aim of the London games was to inspire a generation, the next generation. Smith outlines how despite that not being the main goal for her, it can be the most rewarding.

“I never really feel like I have inspired anyone. You do get people who say I saw you at the Olympics, you really inspired me to get into the sport. Someone tagged me on Instagram the other day on International Women’s Day saying it is down to this girl that I am involved in this sport. I’m a coach and I have my own club. That is really quite humbling.”

Zoe Smith is working with Sports Direct on Equal Play, the brand’s long-term commitment to driving equality in sport. Sports Direct and the charity Women in Sport have launched a new report identifying what needs to change to close the gender gap, which they’re now acting on.