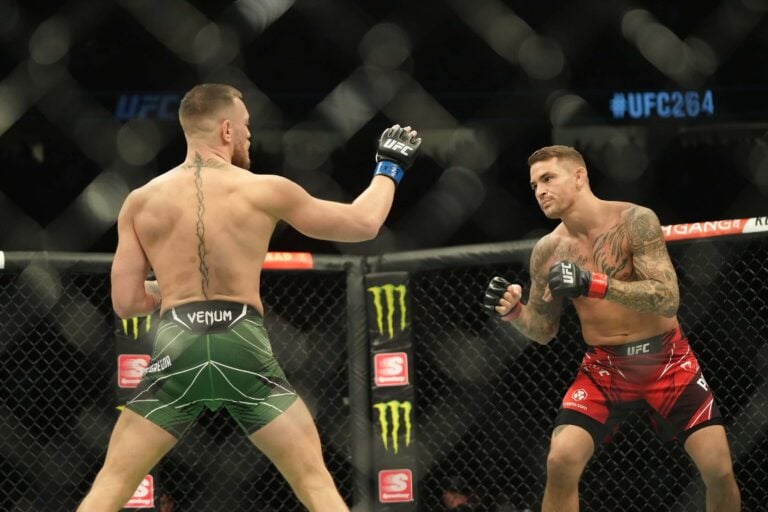 2021 has provided fans with some unbelievable contests. Which makes the job of Adam Catterall that much harder when zeroing in on his fight of the year.

The UFC has treated MMA enthusiasts to a wonderful twelve months of action. We’ve had the privilege of witnessing some unbelievable battles. Petr Yan vs Corey Sandhagen was an absolute barnburner, whilst the Kamaru Usman – Jorge Masvidal rematch had fans around the globe on the edge of their seats.

And what about the Dustin Poirier vs Conor McGregor wars? There has been no shortage of enthralling scraps in the centre of the cage.

Yet Catterall believes two matchups stand out from all the rest.

The Fight of the Year

The UFC held incredible events in the lead-up to Christmas. Therefore, the Fight Disciples Podcast host, picking exclusively for Sporf, had no other choice than to go for two fights within the final third of 2021.

Catterall said: “If it’s not for a title, I’m going Chandler vs Gaethje, but the best championship fight was Alexander Volkanovski vs Brian Ortega. Check them both out and take your pick. Do you like Rock-em Sock-em robots, or do you like adversity.”

The bouts that Catterall picked are undeniably two of the best in UFC history. So let’s reminiscence over those incredible nights.

This captivating war made for one of the greatest title fights in promotion history. The Australian champion dominated most of the contest with his superior boxing ability and ring IQ. But unbelievably, on two separate occasions, his American opponent was able to catch him in dangerous submission attempts.

Ortega’s guillotines were wrapped so tight it seemed like Volkanovski’s head would explode. But somehow, the Aussie survived. His impressive display of grit and determination made this a contest that fans will be watching back years from now.

This war highlighted just how entertaining this sport can be. At UFC 268, two of the most courageous athletes in the company squared off in one of the best fights in MMA history.

Both men were rocked on numerous occasions, and although Gaethje may have won the bout, there were no losers that night. Chandler emerged from the cage with an enormous amount of praise for the guts and courage he displayed.

He may not receive another UFC title shot anytime soon. But on November 6, the former Bellator champion solidified his UFC legacy.

The End Of Year Show

We hope you all enjoy the festive season with your families.

As soon as you’re done opening presents and eating pigs in blankets, you’ll be able to tune in to the full edition of Caterall’s corner.

Sporf will release the exclusive end-of-year edition of Catterall’s Corner on our social channels in the lead up to the New Year. Join us as he breaks down all the biggest knockouts and upsets and gives some mental predictions for 2022.