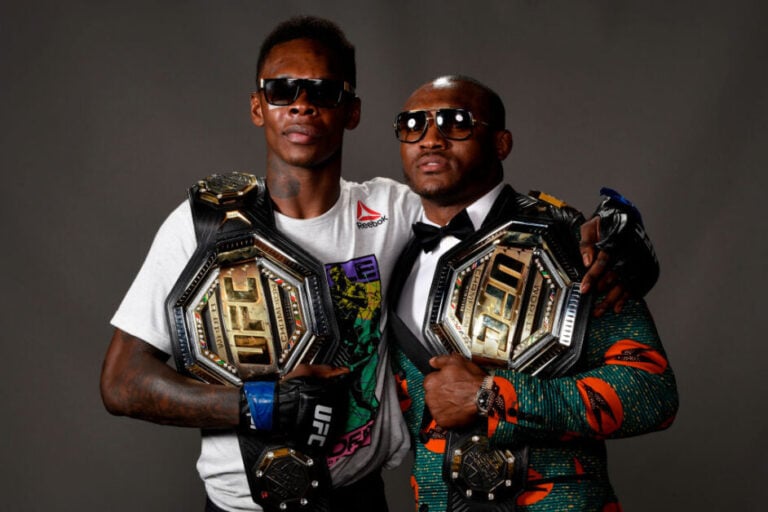 The title of Fighter of the Year is one of the most prestigious honours an athlete can receive. Therefore, we needed a real MMA expert to determine who should win the award. Who better than Adam Catterall?

We’ve had the privilege of watching Glover Teixeira go on one of the most remarkable runs in the sport’s history. It ultimately culminated in a fantastic fairytale ending for the Brazilian, who became the oldest ever first-time champion in the promotion’s history. And what about Julianna Pena, who announced herself to the world with her incredible upset win over the legendary Amanda Nunes?

They are great shouts for a nomination, but Catterall thinks two other athletes stand out above all the rest.

Who is Catterall’s Fighter of the Year?

The Fight Disciples Podcast host was spoilt for choice in selecting the candidates for the award. But in the end, he settled on two men who more than deserve the credit for their remarkable showings in 2021.

“But you could also opt for the new champ, Charles Oliveira, who beat Michael Chandler and finished Dustin Poirier. For me, it’s a coin toss.”

There’s no doubt that the two fighters that Catterall has picked have had a sensational twelve-month stretch. So to celebrate, let’s reminisce over their iconic performances.

In the past, fans dismissed ‘The Nigerian Nightmare’ as boring to watch. Despite Usman’s evident ability, his grappling-heavy contests didn’t excite the general public.

However, this year that all changed.

He started 2021 with an incredible come-from-behind victory against his teammate Gilbert Burns. The 34-year-old rose from the canvas to take his friend into darker places than he could handle before getting the finish in the third round.

He followed this by well and truly settling the score with Jorge Masvidal. The Welterweight King landed an absolute thunderbolt of a right hand to put the durable fan-favourite to sleep for the first time in his career.

What followed was maybe the biggest achievement of his life so far. He headlined the iconic Madison Square Garden and defended his belt in a thriller against Colby Covington in the process. Usman is head and shoulders above his competition.

The Brazilian had an astounding year, taking over Khabib’s role as the big boogeyman of the lightweight division.

In both his bouts against Michael Chandler and Dustin Poirier, the 32-year-old had to overcome massive amounts of adversity.

His two American opponents possessed wrecking machine-like power, which Oliveira couldn’t avoid. He hit the canvas in both championship fights but rallied to find victory.

Following these performances, the lightweight king has proven that he’s willing to do whatever it takes to get the victory.

The End Of Year Show

We hope you all enjoy the festive season with your families.

But as soon as you’re done pulling crackers and pretending to be thankful for your Lynx Africa gift sets, you can tune into the full edition of Catterall’s Corner.

Sporf will release the exclusive end-of-year edition of the weekly show on our social channels in the lead-up to the New Year. Make sure to join us as the Northerner breaks down all the best knockouts and upsets while offering predictions for 2022.