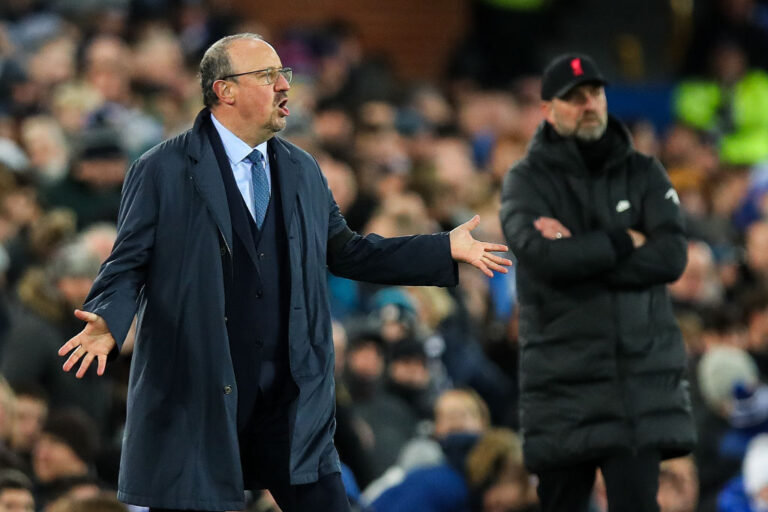 Rafael Benitez – or Agent Rafa as he’s known around Anfield – faced his former club this evening. This was the first time Benitez faced Liverpool as the manager of Everton. Needless to say, Liverpool fans enjoyed the occasion.

Everton’s win over Liverpool in February was their first since 2006 in the Premier League. When these two sides meet, Liverpool often come out on top.

Benitez’s sides are usually well-drilled. The Spaniard is meticulous and will be furious his side conceded within nine minutes.

Liverpool captain, Jordan Henderson, started the move before guiding a fantastic curling shot around the defender and Jordan Pickford into the near post. Everton were put on the backfoot early as Liverpool piled on the pressure.

The Reds doubled their lead ten minutes later. Ben Godfrey’s poor touch was punished by Liverpool. Henderson played a fabulous through ball to Mohamed Salah. The Egyptian struck the ball past a hapless Pickford into the far side of the net.

Despite Liverpool’s dominance, Everton got themselves back in the game. Demarai Gray pounced on Richarlison’s ball and slotted the ball under the onrushing Alisson.

The response would have thrilled Benitez as his side were under the cosh for large periods of the first half.

One thing Liverpool can guarantee is pressing the opposition. It was no surprise when Salah pounced upon Gray’s poor pass to Seamus Coleman. The Egyptian sprinted through Everton’s half before coolly slotting home Liverpool’s third.

It got worse for Everton when Diogo Jota scored brilliant fourth. The Portuguese stretched to control a poor Andrew Robertson ball. He dragged it past Allan and fired it over Pickford from a tight angle.

The defeat to Liverpool means Everton are without a win in eight Premier League games. It is a run that stretches back to September.

As a result, fans are starting to worry.

Benitez could not afford a run of form like this. Injuries and finances cannot be an excuse for the ex-Liverpool manager. The Spaniard would not have expected too much time to win over Everton supporters.

Benitez needed to hit the ground running, which he did. Everton began the season impressively. Everton registered ten points from their first five games.

Yet the pressure is mounting on Benitez after the Merseyside derby defeat. It will be a surprise if Benitez sees out the season at Goodison Park.

Liverpool supporters have a fondness for Benitez. He delivered the FA Cup, Champions League and UEFA Super Cup during his time at Anfield.

After the heroics of Istanbul in 2005, Benitez guided Liverpool to another Champions League final in 2007. On that occasion, the Reds came up short against AC Milan.

Benitez brought spirit and belief to Liverpool. He connected with the supporters and got to know the area. He knew just what the club meant to the supports.

Liverpool fans adored him as a result.

Agent Rafa can still feel the adoration from Liverpool fans, though not for the reasons he would like.

Moving to Everton always felt like a strange decision by Benitez.

It was never going to be an easy ride for him.

Perfection was the requirement for the ex-Liverpool boss to receive acceptance at Goodison Park. One slip-up and the pressure was on immediately.

It appears as though Benitez did not understand the difficulty of the job when he took over. His Everton tenure is rapidly turning into a nightmare.

While Liverpool supporters revel in their Agent Rafa jokes, Everton supporters will be thinking of who can replace him.

Everton fans are the least optimistic ahead of new season