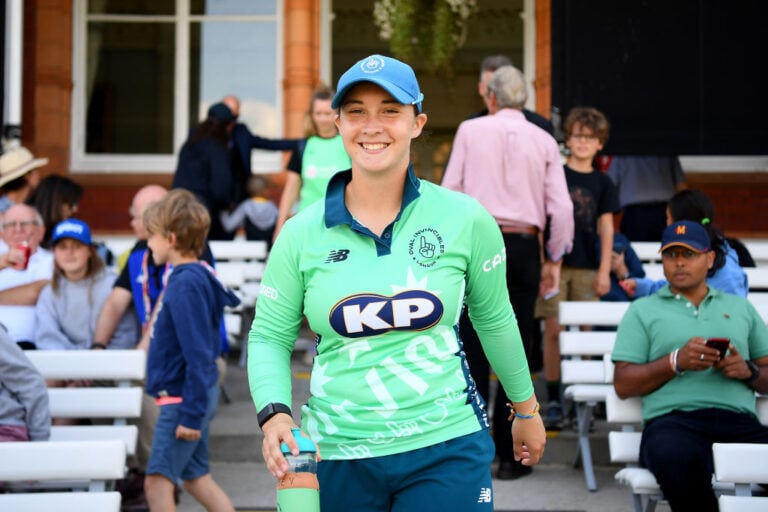 Alice Capsey can add another success story to her cricketing resume as she helped Oval Invincibles to win The Hundred women’s competition on Saturday – capping off an incredible 12 months for both herself and the franchise.

Capsey began the inaugural competition last season as the youngest player in The Hundred. At just 16 years of age, Oval Invincibles had to get permission from her mother in order for her to play.

The all-rounder, who can open the batting but has played at number three this season, didn’t even think she would be picked in the side. But she went on to play all 10 games. Capsey scored 150 runs from eight innings. Those runs were scored at an excellent strike rate of 126, with a high score of 59, and Alice Capsey quickly became a household name during The Hundred.

She played in the final against Southern Brave, who also contested the 2022 showpiece event,. Invincibles secured victory, with Capsey hitting 18 from 12 balls. She also took 2 for 21 with the ball.

Since then, her stock has grown even further. She made her England T20 debut earlier this year, impressing enough to earn a spot in the squad for the Commonwealth Games. From there, Capsey hit her first international half-century against South Africa.

During this season’s Hundred, she has had key contributions with bat and ball. Prior to the final, she hit 96 runs and taken six wickets, including 3 for 15 against Birmingham Phoenix. Then, at Lord’s, she would take 2 for 17 with the ball, before striking a valuable 25 off just 17 deliveries in the run chase.

It has been a rollercoaster year. Speaking exclusively to Sporf ahead of what was the Invincibles’ final group game against Manchester Originals on Wednesday – which they won – she says she could never have imagined what has happened.

“I went in [to last season’s Hundred] knowing, in the back of my head, that I was the youngster, and there was so much experience and talent in our group last year that I didn’t really expect to play,” she began.

“So then to come on to the end of The Hundred, and to get the attention that I was receiving, was quite strange, and definitely not something I expected.

“Even at the beginning of this year, to tell me that I’d make my international debut, and play at the Commonwealth Games, I would have probably pinched myself. So it’s been an incredible couple of years, and a couple of years which have been really unexpected but, obviously, absolutely amazing.”

One of the major positives from The Hundred has been the opportunities given to women’s cricketers to play on the best grounds and pitches. Speaking to Sporf earlier this year, England bowler Kate Cross spoke about the importance of this for young players, something echoed by her international team-mate Katherine Brunt on Sky Sports.

Alice Capsey agrees with those verdicts, and spoke about how playing in The Hundred has sped up her development as a cricketer.

She explains: “You learn so much as a younger player just by watching [the best players] going about their business. How they talk between each other, and just their general knowledge.

“Even going into this, I’ve learned so much from having conversations with [Oval Invincibles team-mate] Lauren Winfield-Hill, who is obviously a very experienced player. So I think it’s really important. It has definitely benefitted me.

“Touching on playing at the good grounds, I think it’s also the exposure to the crowds which The Hundred brings. I’ve said it a number of times – I think playing in The Hundred last year really set me up for making my international debut.

“It kind of removes the nerves of the crowd, because you’ve obviously got the nerves of making your international debut, but actually feeling comfortable enough to play on the pitch, and be in front of that sort of crowd and feed off their energy, it was amazing.”

With the final of The Hundred women’s competition for 2022 now completed, Capsey and Oval Invincibles will be looking ahead to next season, where the franchise will hope to win their third successive Hundred title.