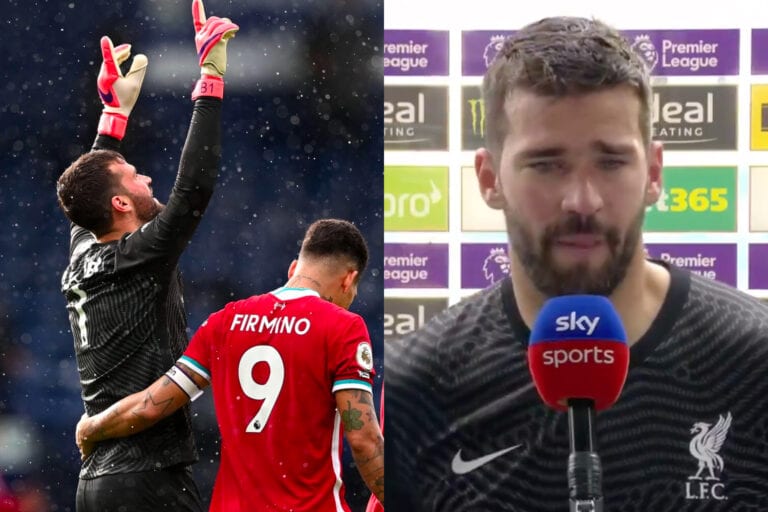 Liverpool goalkeeper Alisson produced one of the most incredible moments of the season when he scored a last-minute winner against West Bromwich Albion on Sunday.

The Brazilian stopper came up for a corner before connecting with an inch-perfect header that nestled into the top corner to win the game 2-1, with what was the last kick of the game.

And he gave an emotional interview after the game, with the goal arriving after what has been an incredibly difficult few months for him and his family.

Alisson’s father tragically passed away in February in his native Brazil – and the Liverpool goalkeeper dedicated the goal to him.

He told Sky Sports: “I’m too emotional – these last months, for everything that happened with me and with my family.

“Football is my life, I play since I remember as a human being, with my father.

“I hope he was here to see it, but I’m sure he is seeing it with God on his side and celebrating.

“It is for my family, for the boys. What a fight, sometimes we are fighting, fighting, things just are not happening, as this afternoon here.

“Scoring this goal, I’m really, really happy to help them because they fight a lot.

“We fight a lot together and we have a strong goal to achieve the Champions League because we won it once and everything starts with the qualification, so I can’t be more happy than I am now.”

With 94 minutes played, Liverpool were drawing 1-1 and Champions League qualification was set to be out of their hands.

But Alisson’s header changed all that. Should Jurgen Klopp‘s side win their two remaining games, they are almost certain to get into the top four (depending on goal difference).

They take on Burnley at Turf Moor, before hosting Crystal Palace at Anfield on the final day of the season.