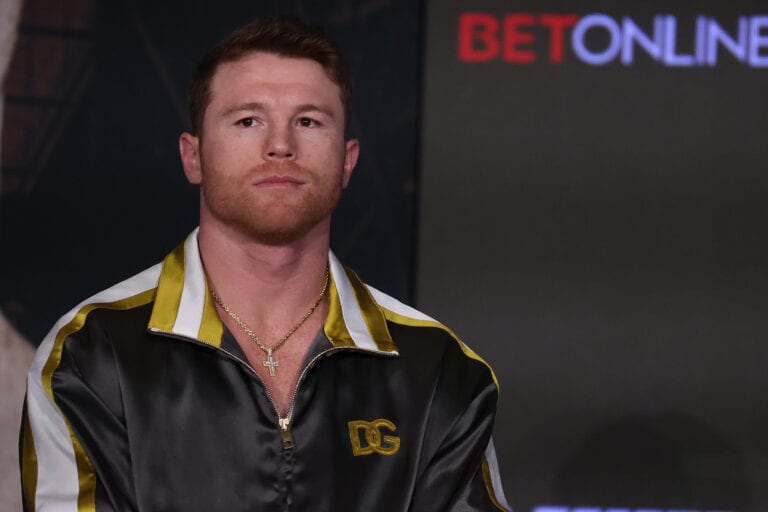 Canelo Alvarez was confronted by Demetrius Andrade in a heated exchange during Canelo’s post-fight press conference on Saturday night.

The Mexican star was celebrating his win over Billy Joe Saunders when all of a sudden, Andrade decided to insert himself into Canelo’s time in the spotlight.

Alvarez is best known for his boxing ability but he’s also considered to be quite a cool, calm and composed figure within the sport. However, when Andrade decided to try and get some shine from him, Canelo cut a slightly more annoyed persona than we’re used to.

.@BooBooAndrade just interrupted @Canelo’s presser to demand a fight and what a wild scene it was! Andrade was escorted by security as Alvarez repeatedly said “get the fuck out of here, you’ve fought nobody” while laughing. Never seen this much emotion from him #CaneloSaunders pic.twitter.com/BC2IsYLnLH

Canelo “FUCK YOU!” to Andrade! Boo Boo held back as they Curse Each Other Out! #CaneloSaunders pic.twitter.com/WafCbG0wqd

“So, when can we get something going on? Let’s make it happen. What’s up Canelo? Congratulations today though, good job baby, good job,” said Andrade.

“I’m a big fan, but what’s up though? When can we make it happen? What you think?”

It’s safe to say these aren’t scenes we’re used to seeing with him but from Andrade’s point of view, he’s definitely got the reaction he was looking for.

Boxing is an unpredictable sport and money is often the biggest factor of all behind fights being made. Therefore, if Andrade can keep poking the bear, he may get exactly what he wants and then some.