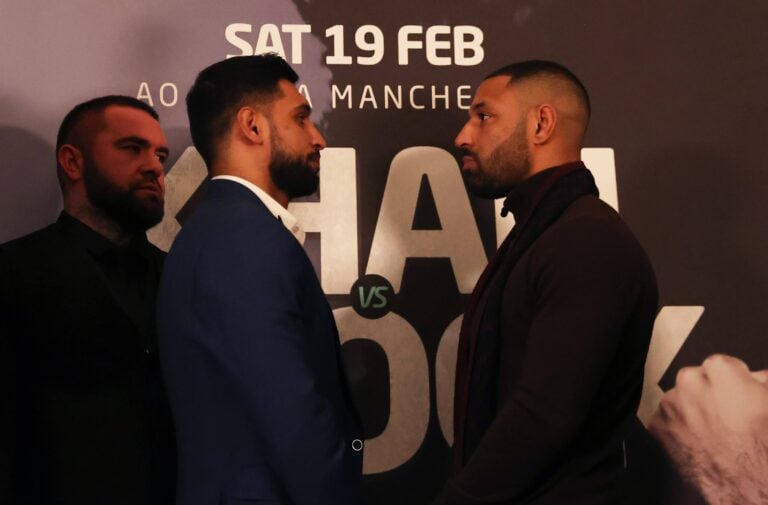 Amir Khan and Kell Brook will finally settle their rivalry in one of the biggest grudge matches in British boxing history.

It’s been a long nine years since the two sporting greats first squared off on Sky Sports Ringside. Fans have had to endure constant heartbreak as the pair endlessly seemed to tease them before ultimately moving on in separate directions.

The former Olympic silver medalist Khan has become a global superstar, headlining massive shows in the UK, America and even Saudi Arabia. His career earnings and mainstream media profile have far surpassed Brook, giving him an advantage in negotiations.

However, it seems after years of raising the hopes of the British public, and indeed his arch-nemesis, ‘King Khan’ has finally agreed to give the people what they want.

The pair of boxing icons met at their first press conference yesterday, and the war of words quickly escalated. Let’s take a look at that and more, including the date of the Khan v Brook fight:

What happened at the media event?

It’s fair to say that there’s more than a little bit of animosity between two of the UK’s best-ever welterweights, and that indeed showed on Monday.

It didn’t take long for the verbal sparring to begin, and when it did, the proceedings took a vicious turn.

Brook said: “I’m going to knock you spark out. You’re getting it. I’m going to look over you and say, ‘I told you, Amir’. You used to say, ‘Who is he?’ You know exactly who I am. I’m going to retire you. Just make sure you turn up.”

This comment angered the former unified super-lightweight champion, who hit back with a vengeance.

“We’re going to see on February 19. You’re not going to do s**t, trust me. What fight have I never turned up for? Shut up. It’s better that you stay quiet because the s**t you’re coming out with doesn’t make sense.”

Have Khan and Brook shared the ring before?

‘King Khan’ and ‘The Special One’ may never have met in the professional ranks before, but the pair shared countless sparring rounds in their amateur days. Those sessions aren’t available to view, so it isn’t easy to know what happened as both boxers tell drastically different accounts.

The Bolton man claimed: “In the early days, I used to school him. Why did I get picked for the Olympic team? Because I was schooling Kell Brook with one hand. I used to go to the training camp, and the coach would tell me to just use one hand against him.”

“I’d throw a jab, left hook, uppercut, and the coach would say, just use your jab. I’d school him with the jab. You had it. You’re going to get it.”

“When you look at a sparring session, and you see the poor kid like you getting battered, you think you can’t take him to a championship just to get beat. That’s the reason I got picked because I was schooling you all the time.”

Brook completely denied this version and put Khan’s ‘false’ recollection down to his knockout defeats.

The 35-year-old responded: “This guy is so deluded. You know what happened in that sparring, you haven’t schooled anyone.”

Has either fighter been active?

Neither boxer has fought in 2021, and that isn’t ideal preparation for either man.

‘King Khan’ hasn’t been in the ring since defeating Billy Dib at the King Abdullah Sports City in Jeddah, Saudi Arabia, in July 2019. The fight may have only lasted four rounds, but at least the Bolton man will have some momentum going into the biggest battle of his life.

On the other hand, Brook is coming into this contest off the back of a fourth-round stoppage defeat against Terence Crawford last November. The ex-world champion looked razor-sharp for the first nine minutes before a glancing blow sent him crashing towards the canvas.

Although his performance was good while it lasted, pundits have questioned whether the Sheffield man’s punch resistance has evaporated. However, this isn’t necessarily an area where Khan will have an advantage, as he has also suffered knockouts on multiple occasions.

Do Khan and Brook have a mutual opponent?

In his fight before Dib, the Olympian had also shared the ring with Terrence Crawford. Unlike Brook, he was able to extend the American to the sixth round. However, he asked his corner to pull him out after he was inflicted with a low blow which he felt ended his chances in the fight.

Khan faced controversy for ‘quitting’ that night. His desire to give his absolute best had previously been apparent throughout the entirety of his career. He has risen from the ashes of defeat to emerge victorious on more than one occasion.

Brook faced similar controversy after taking a knee rather than continuing to fight on against Errol Spence Jr. However, the fractured orbital bone that he sustained at Bramall Lane could have ended his career and caused further health issues had he suffered any more damage to it.

The verbal sparring continued at the press conference as the rivals argued about the manner of their defeats to Crawford. The former ‘I’m A Celebrity’ star questioned his counterpart’s ability to take a punch.

Khan argued: “You got knocked out by a jab against Crawford, p***y. Everyone can talk a big game, but we’ll see what you bring to the table on February 19.”

This remark angered ‘The Special One’, who in turn vocalised his opinions on the infamous ‘low blow’ incident.

Brook snapped back: “You looked for a way out and quit in that fight.”

What date and where is Khan vs Brook?

The massive all-British affair between Amir Khan and Kell Brook will take place at the iconic Manchester arena on the date of February 19.

Khan has home advantage in what will be a massive event on Sky Sports Box Office.

Tickets to the eagerly awaited contest are expected to go on sale soon and will likely sell out within the first day of release.

This fight marks Sky Sports’ first return to the PPV platform since longtime promoter Eddie Hearn moved on from the British broadcasting giants. His decision to commit to streaming network DAZN surprised some fans and left Sky needing a new promoter.

Bob Arum and his promotional outlet, Top Rank, agreed to cross the Atlantic to stage fights. However, Ben Shalom’s BOXXER rose from obscurity to create the event that seemingly no other promoter could put together.

This incredible contest will be part of a great start to 2022 for Sky, who will also broadcast Chis Eubank Jr vs Liam Williams and Josh Taylor vs Jack Catterall.

Fans have been waiting for nearly a decade for this fight. On February 19, they will finally get to see this rivalry reach boiling point.

The contest is nearly impossible to call. Brook’s straight right hands could be far too accurate for Khan. However, with the Yorkshireman’s resilience decreasing, could his ex-Team GB stablemate be quick enough to catch him and hurt him?

The build-up is guaranteed to provide even more fireworks as we work towards this mega showdown.

A scrap between Khan and Brook is the most significant all-British affair that we have had in years. When the pair finally meet in the ring, there will be more than just legacy on the line. These two men genuinely despise one another.

There couldn’t be more at stake for these two boxing legends. For British fight fans, the date of February 19 couldn’t come quick enough for Khan vs Brook.