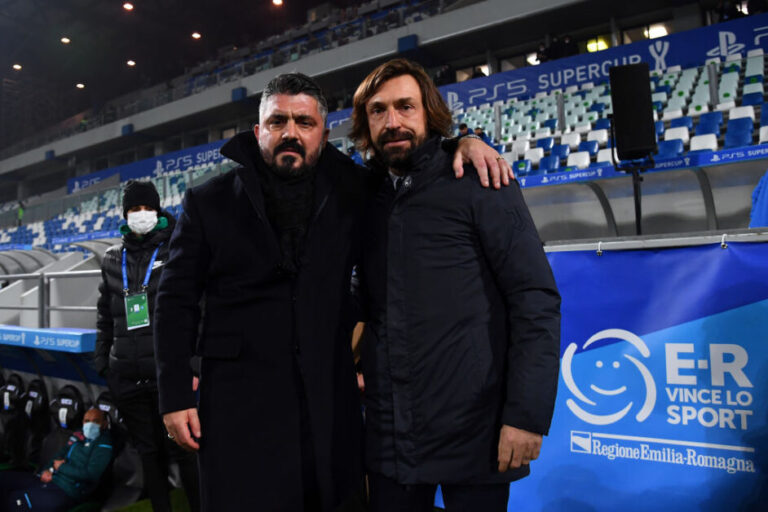 Gennaro Gattuso and Andrea Pirlo won nearly all there is to win in the game for AC Milan and Italy. But their close friendship forged through that success was put to the test, when Pirlo managed to cajole his former teammate into eating a slug.

Over the years, the pair’s style of play complemented each other to a tee. Gattuso was the midfield general in tandem with Pirlo, who was the silky deep-lying playmaker.

And it was a partnership that certainly worked. It brought them huge success,
winning two Champions League winners’ medals with Milan.

The first of those came in 2003 at Old Trafford. The Rossoneri overcame Juventus 3-2 on penalties to win what is, to date, the only all-Italian Champions League final.

Four years later, Milan beat Liverpool 2-1 in Athens to avenge their defeat to the
Merseyside outfit in that famous comeback in Istanbul in 2005.

The midfield duo also celebrated winning the Club World Cup in 2007. Domestic success arrived from winning two Serie A titles in the 2003/04 and
2010/11 seasons.

At international level, Pirlo and Gattuso yet again reached the pinnacle by winning the 2006 World Cup.

Once more it was a victory claimed in dramatic circumstances, with a 5-3 victory on penalties over France. Pirlo scored the opening penalty for the Azzurri in what was an unforgettable night for Italian football.

Pirlo and Gattuso the managers

After their illustrious playing careers came to a close, Pirlo and Gattuso were managerial adversaries in the 2020/21 season.

Gattuso was at Napoli in his sixth managerial position, and faced his former
midfield partner, who was in his first senior managerial role in charge of Juventus.

It was honours even in their Serie A dugout duels, with Napoli winning at home 1-0.
Meanwhile, Juventus won the reverse fixture in Turin 2-1.

Juve eventually ended the season in fourth place, their worst top-flight finish since the 2010/11 season. Their trevails were documented as part of Amazon Prime‘s ‘All Or Nothing’ series, and it is there that Pirlo made a bizarre admission.

The two old mates met for dinner on the night before the Italian Super Cup final in
January last year, which Juventus won 2-0.

As per AreaNapoli, Pirlo was joking around and said: “Once we made a bet, you know, the snails, the ones without their shells, so big?

“We said, ‘Come on Rinos, if you eat it, we will give you 10 thousand euros, we collect them and then you give them to the warehouse workers.”

Gattuso, well known for his fiery and combative style of play, didn’t take the joke so
lightly.