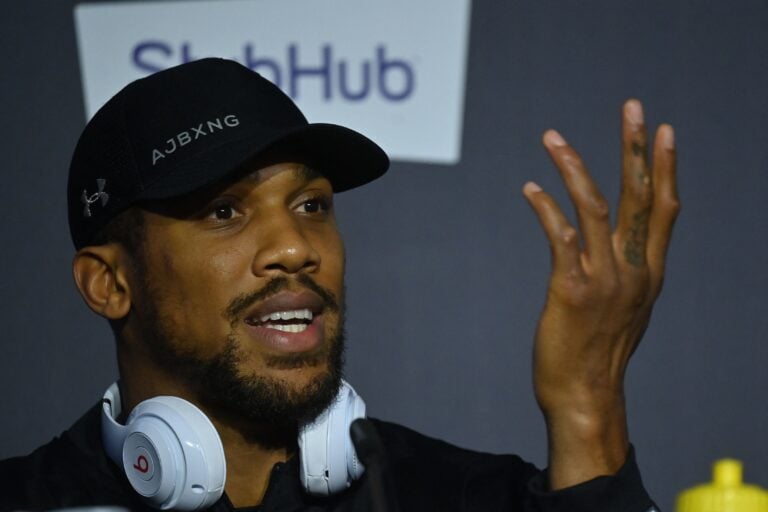 Anthony Joshua has congratulated Tyson Fury for his knockout victory over Deontay Wilder in their trilogy fight last month.

The ‘Gypsy King’ retained his WBC and The Ring titles in a superb display in Las Vegas. Fury knocked Wilder down in the third round, and despite himself going to ground twice in round four, he bounced back to send his opponent to canvas on two further occasions. When Fury hit the deciding blow in round 11, he was ahead on all three judges’ scorecards.

Speaking to iFL TV about the fight, Joshua praised both Fury and his corner for the victory.

He said: “Fury did really well for a man in his first title defence as a champion. It just shows how tough it is being champion at the moment.”

“But he did very well to come through the storm. SugarHill [Steward, Fury’s trainer] in the corner, you’ve got to give him a round of applause. That helped him a lot, having that wisdom and that trust. A great corner set-up.”

“Well done to him, first defence, WBC champion of the world and two-time champion, it is lovely for his and wife and family, his old man [John Fury], who deserves it and is his biggest f*****g supporter. I make my family proud, it’s good to see him making his family proud, so well done to them.”

Immediately after the Fury/Wilder fight, Fury’s promoter Bob Arum said the bout was “the best heavyweight fight I have ever seen“.

Although Wilder initially told Fury that he didn’t respect him immediately after the bout, he later took to Instagram to congratulate his opponent on the victory.

And last week, Fury even sent a special message to Wilder on his 36th birthday – referring to the ‘Bronze Bomber’ as his “old pal” in a Twitter video.

Joshua, meanwhile, is next set to take on Oleksandr Usyk in a rematch after the Ukrainian defeated him last month to win the unified WBA (Super), IBF, WBO and IBO heavyweight titles.

His promoter Eddie Hearn said last week that the blockbuster bout could take place next spring.