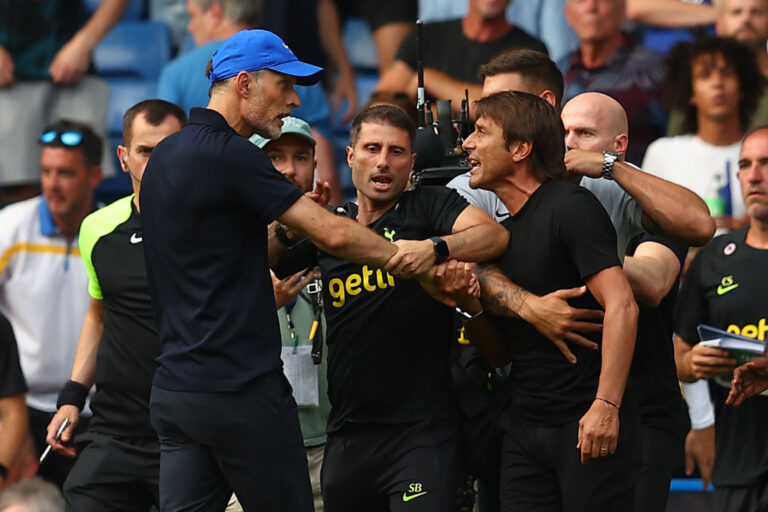 The pair had numerous clashes during the 2-2 draw between their sides at Stamford Bridge. Numerous controversial decisions and a high intensity kept the game at a boiling point for 90 minutes – and after the final whistle.

However, as much as there was on-pitch excitement, the off-pitch antics caused a stir. After a Spurs equaliser, the coaches of both teams got into a shoving match. This ultimately led to a yellow card apiece for Tuchel and Conte.

Then, the German raised tensions further by sprinting past the away dugout in celebration of Reece James’ goal.

Finally, at the final whistle, the managers had another altercation, seemingly caused by a disagreement over a handshake. Referee Anthony Taylor then gave both Tuchel and Conte a red card post-match.

As a result, fans and media alike want to know what happened between the two managers.

Speaking to Sky Sports post-match, the leading topic of conversation was the incidents that occurred off the pitch. Firstly, Thomas Tuchel gave his view of the wild scenes.

“I thought when you shake hands, you look into each other’s eyes,” he explained. “And Antonio had a different opinion. So, he was happy when he equalised, and it got a bit heated but nothing big.

“I think it [the red card] was not necessary, but a lot of things were not necessary. Another poor decision from the ref today.”

On the earlier mid-game clash, the Chelsea boss declined to explain what happened. Instead, he stated there was “no problem” during the match.

“It was emotional, it’s football. You like it – just don’t need comments on it. It’s the game, the Premier League. You love it, no?

“There’s not a problem,” continued Tuchel. “It’s between a football match. Come on, guys. It’s between men, it’s between two competitors, and nothing bad happened.”

In contrast to Thomas Tuchel, Antonio Conte did not address the antics that occurred after the final whistle.

“In my opinion, it is better to talk about the game,” said Conte, via Sky Sports. “It was an exciting game and was a difficult one for both teams.”

“I don’t want to comment on the situation because I think this is not the most important thing. If there is a problem, the problem is between me and him, not for the others. We are here to talk about football, not the situation between two coaches.”

Despite his earlier silence, the Italian carried the feud with the Chelsea boss onto social media later in the day.

Taking to his Instagram, Conte posted a story that displayed a still shot of Thomas Tuchel running past him in celebration. Tuchel took off down the touchline in a brash celebration after Reece James restored Chelsea’s lead.

In the caption, the Spurs manager gave Tuchel a tongue-in-cheek warning.

“Lucky I didn’t see you,” wrote Conte. “Making you trip over would have been well deserved…”

He followed up the message with three laughing emojis.

Currently, Tuchel is yet to respond to Conte’s post. He will undoubtedly field questions about it when he next faces the media, though.

This peak Premier League box-office clash was entertainment gold for all viewers. Unfortunately, we may have to wait a while for the next face-off between the pair. The return Premier League fixture at Tottenham Hotspur Stadium is not until February 25.

Hopefully, both bosses will seek to one-up the other in another pulsating fixture later this season.