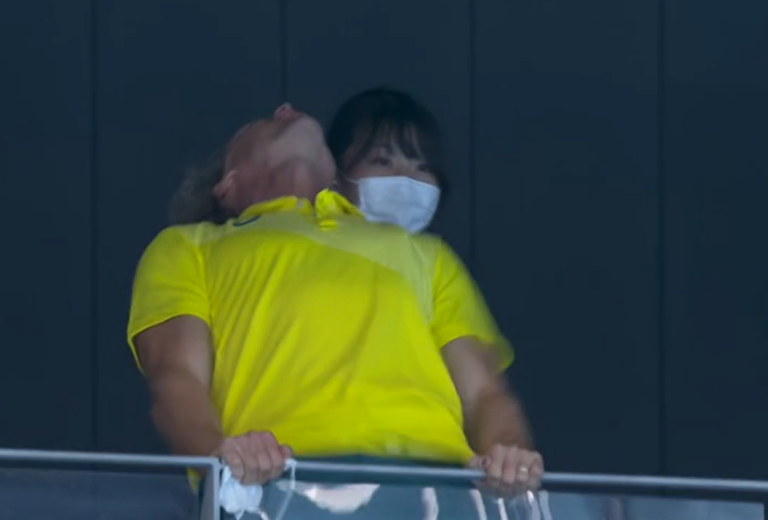 Titmus was up against US superstar Katie Ledecky in what had been billed as one of the biggest head-to-head battles of the Games.

Titmus, meanwhile, beat Ledecky in the 400m event at the 2019 World Aquatics Championships.

In Tokyo, the 20-year-old defeated her US rival by almost 0.7 seconds, securing her first ever Olympic medal in the process.

Ledecky had led at the halfway stage, but the Australian fought back to claim gold.

And the reaction of her coach, Dean Boxall, was perhaps one of the most exuberant ever seen at the Games.

As soon as Titmus crossed the line, Boxall sprinted across the viewing area before ripping off his mask, punching the air several times and performing what looked like a manic hip thrust against the barriers.

Unsurprisingly, his celebrations have since gone viral on social media, with plenty of users from across the world having their say:

One user even compared Boxall’s reaction to the legendary wrestler Ultimate Warrior.

Another went a step forward and dubbed Warrior’s theme music on top of the video of Boxall’s celebrations.

Boxall speaks out on celebrations

Speaking after the final, Boxall summed his feelings up perfectly by admitting: “Yeah, I lost it.

“I think I went outside of my body. I just lost it. I’ve been with this girl five years, you know, having a dream together.”

He even went on to admit that his celebration was in fact partially due to the Ultimate Warrior, who was his hero as a child. A great moment.

Roma confirm Jose Mourinho to take over as head coach

Roma confirm Jose Mourinho to take over as head coach