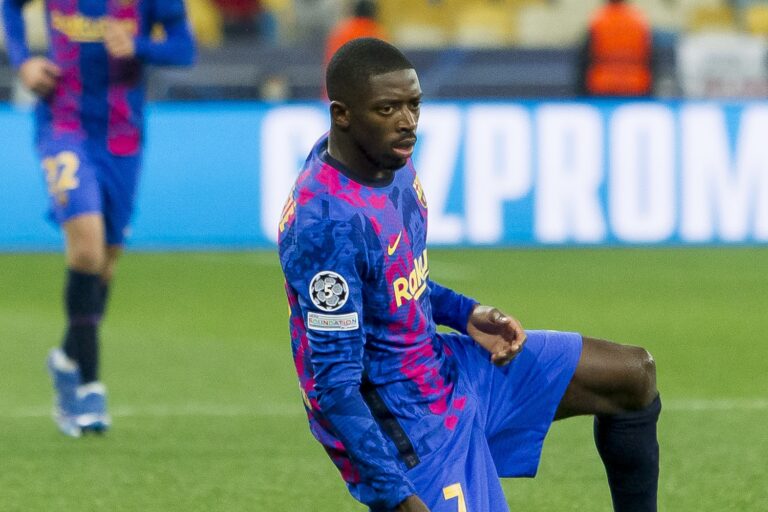 Barcelona may have figured out a possible way to keep all parties happy as they continue negotiations with Ousmane Dembele.

It’s no secret that the relationship between Barcelona and Ousmane Dembele hasn’t always been perfect. At the same time, there remains an underlying appreciation for his ability on the pitch.

Now, with the clock ticking, Barca are reportedly willing to go outside their comfort zone to keep him on the books.

Ousmane Dembele made his first appearance of the season this week after nearly five months out through injury.

The backstory of Ousmane Dembele

Ousmane Dembele signed for Barcelona on a five-year deal back in August 2017. At the time, the Spanish giants had to fork out €105 million to lure him to the Nou Camp.

He’s repaid them in kind with 30 goals in 119 appearances to go alongside a host of impressive performances down the flank. From his speed to undeniable skill in one-on-one situations, he can often look like he’s walking on air.

Alas, between injuries and the first team’s uneven form, it hasn’t always been smooth sailing for the Frenchman.

Dembele has frequently been linked with a move away from Catalonia, from as early as twelve months after he first signed. It’s never quite come to fruition, but there’s always been a layer of uncertainty behind his tenure.

Mateu Alemany, director of football at Barcelona, will suggest a model similar to a pay-as-you-play (PAYP) structure. He implemented the system in past jobs, at Mallorca and Valencia, and now, he wants to do the same with Dembele.

If he fails to sign an extension, the attacker’s current contract would see him leave on a free in June 2021. In this instance, his yearly wage would hardly be reduced – and could increase with goalscoring bonuses.

Previously, an example of this idea would be when Manchester United offered injury-plagued Owen Hargreaves a PAYP deal.

The aspirations of Ousmane Dembele are about to come into sharp focus. His career has been successful in terms of winning trophies, though.

He has a DFB-Pokal, two La Ligas, two Copa del Reys and a World Cup to his name.

Yet even with all that in play, we can’t help but feel like there’s some untapped potential.

Barcelona are in the midst of financial issues as well as a rebuilding project. Lionel Messi and Antoine Griezmann have both left for pastures new in the last few months.

The pay-as-you-play idea feels like something that would benefit Barcelona more so than Ousmane Dembele. Moreover, it’d force Dembele to push for consistency as opposed to settling for mediocrity.

Of course, it’d be a great financial move if he has the motivation to be Barca’s talisman, but if not, we can picture him opting for a fresh challenge.