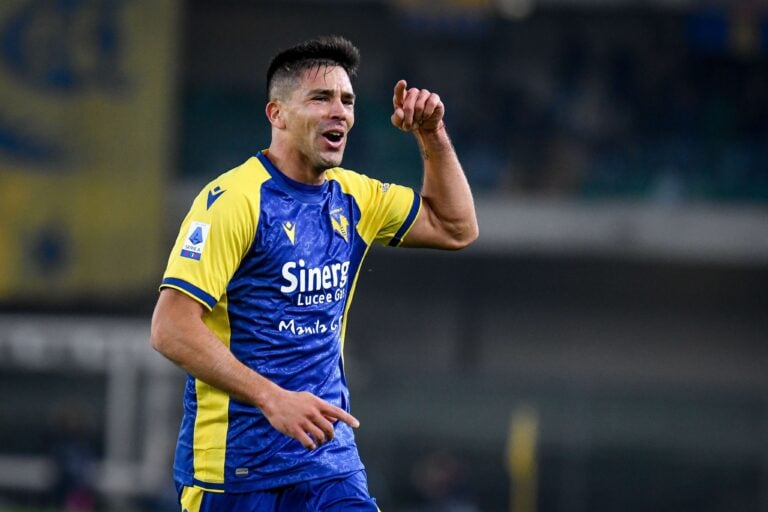 Giovanni Simeone has been awarded the Serie A Player of the Month award for October. He’s also received a stats boost on FIFA 22 that Juventus fans will probably understand.

That’s because Simeone smashed in a brace as Verona defeated Juve 2-1 in October.

EA Sports have given him a Player of the Month card for his performances in Italy’s top division across October. Players can obtain it via the Squad Building Challenge (SBC) section of FIFA 22.

Who is Giovanni Simeone?

When you think of the surname Simeone, you usually think of Diego. Indeed, Giovanni is the son of the current Atletico Madrid boss.

He started his career in his native Argentina, playing for River Plate and Banfield, before moving to Italy to join Genoa.

Simeone then spent two years with Fiorentina between 2017 and 2019, scoring 20 goals in 74 appearances.

Two seasons followed at fellow Serie A side Cagliari before joining up with Verona on loan for this season. The 26-year-old currently has nine goals and two assists in 10 appearances this season.

Why was Giovanni Simeone named FIFA 22 Serie A Player of the Month?

Simeone was on top form in front of goal during October.

He smashed in seven goals in five games during the month. Four of those goals came in a 4-1 victory over Lazio. That was after he’d opened the month with a goal and an assist in a 4-0 win against Spezia.

Then came the day that Juventus fans will quickly want to forget. Simeone’s two goals helped down Juve on October 30. That was Verona’s third win of the month.

Simeone was unrelenting in front of goal that evening. He had three shots on target – two of which went in.

The 26-year-old also won two out of six aerial duels (via WhoScored). Both those figures are higher than his seasonal averages, which rank at 1.6 shots per game and 1.7 aerials won per game.

Is his new FIFA 22 rating justified?

His new FIFA 22 card carries a rating of 87 overall – three points higher than his most recent in-form card.

When it comes to individual stat areas, his defending, dribbling, and shooting have all increased by three. His pace has seen a boost of two, whilst his passing has jumped up by six.

His shooting, which currently stands at 86, certainly seems fair when you look at the attributes of other top players in the game – and given that he has had an incredible month. When comparing him with strikers of similar profiles, Villarreal’s Gerard Moreno also has 86 shooting, as does Juventus forward Paulo Dybala.

With Simeone’s pace and dribbling rated at 87, and 82 physical, this is a seriously well-rounded card. It seems well worth the investment at an estimated PlayStation price of just under 40,000 coins (via Futbin).