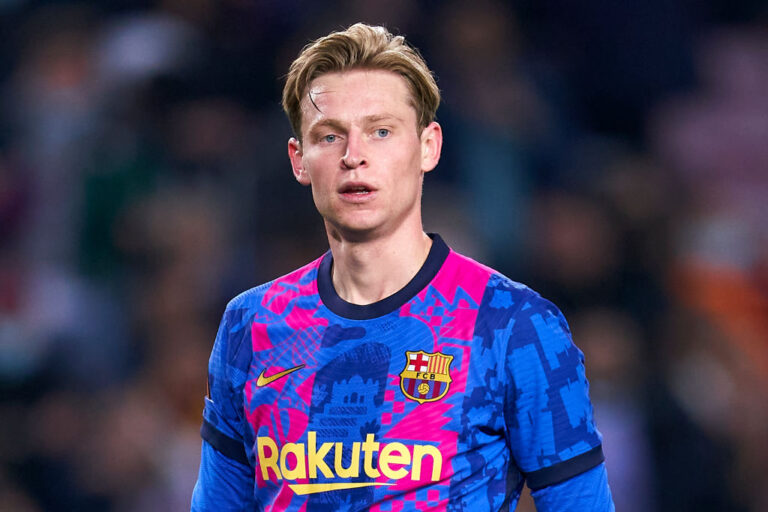 Although Frenkie de Jong has proved his class during his stint at the Nou Camp, new details around his current contract show why Barcelona may need to sell him.

Since his arrival at Manchester United, Erik ten Hag has made it his ambition to bring in the best possible players. And he’s set his sights firmly on his 25-year-old countryman.

Ten Hag managed De Jong during his spell at Ajax. He quickly identified his ability to hold the midfield while creating crucial attacking moves. In addition, the player has an innate sense in navigating his way through narrow spaces and controlling possession with ease.

United fans have found themselves frustrated with the board in recent years. However, it appears they are willing to back Ten Hag. They have reportedly agreed a €65 million deal with Barcelona.

However, his signature will come at a price. The club will have to pay him a similar wage to their biggest stars, such as Cristiano Ronaldo and David de Gea.

But this situation would be far direr for the Spanish club if they found themselves in a position where they had to keep him.

Frenkie de Jong will cost Barcelona a fortune if he stays

It’s no secret that the La Liga giants have had huge financial problems in recent years. The likes of Jordi Alba and Sergio Busquets even took pay cuts to help relieve the heavy strain placed around the club.

But despite improvements on the pitch under Xavi, their financial problems have not gone away.

Spanish outlet Marca have released details of De Jong’s current contract with Barcelona – and it is worth an eye-watering amount over the remainder of the deal. He signed a long- term contract with the club in 2020, and it still has four seasons left to run.

According to the same source, Barca have to pay Frenkie de Jong €88.5 million for the fixed salary and loyalty bonuses in his contract. Furthermore, they have €8 million to pay over a four-year period if he plays 60% of the games, and a maximum of €12.8 million if he reaches the final of the Champions League.

In the Netherlands international’s first season, the Covid-19 pandemic resulted in changes to his contract. As with many Barcelona players, the Dutchman took a wage deferral as the club’s financial problems began to mount. Marca claim he was paid €12.32 million as a result. That was opposed to the €14 million he would have ordinarily received.

Because of his wage deferral, and the additional two seasons on his contract, De Jong is now scheduled to earn €18 million in his penultimate season. This will rise to €19 million in his final season. In addition, his earnings through loyalty bonuses and other variables is also set to rise.

With these eye-watering figures taken into account, it becomes clear as to why Barcelona need his transfer to Manchester United to go through.