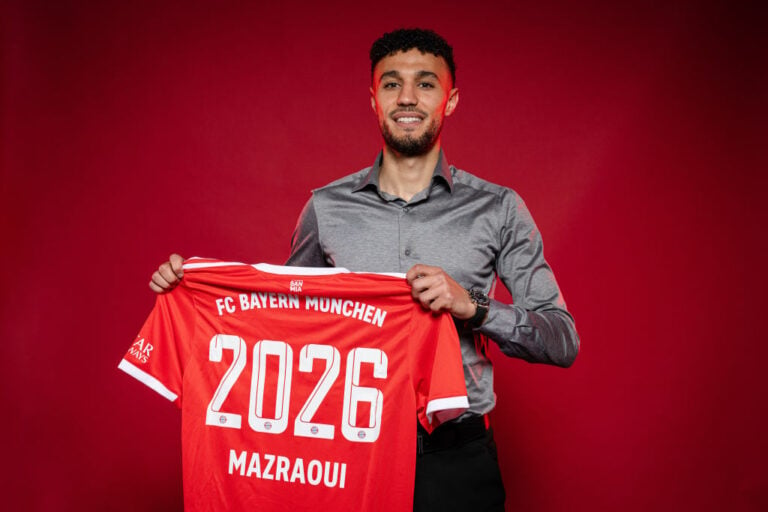 Bayern Munich have officially secured the signature of Noussair Mazraoui, and now they’re on the hunt for another Ajax star, according to reports.

On May 24, the Bundesliga champions announced that they’d bagged one of the hottest defensive prospects in world football on a free transfer.

The highly touted right-back comes to Bayern with a monstrous reputation. Having signed a four-year contract, the dynamic 24-year-old will hope to showcase his blistering pace and skills to the Allianz Arena faithful on a weekly basis.

In his four seasons with ‘de Godenzonen’, he made a massive impact on Erik ten Hag‘s side. Mazraoui bagged three Eredivisie titles and two Dutch Cups. In addition, he contributed to the club’s historic run to the 2019 Champions League semi-finals.

Hence, there’s no doubt that the Moroccan international will bolster the Bayern squad. And some even hope that he can fill the boots of Phillip Lahm. But in further good news for supporters, they’ve almost acquired the skills of one of Europe’s most talented midfielders.

Bayern Munich are closing in on another Ajax favourite

As per Dutch outlet VI, the German giants have submitted an offer of €24.5 million for Ryan Gravenberch.

The 20-year-old has one year left on his contract, but reportedly doesn’t want to spend another twelve months at Johan Cruijff ArenA. Therefore, Bayern are confident in luring the playmaker over to the Bundesliga.

According to Transfermarkt, the midfielder is already worth £31.5 million, with that figure set to rise even higher. Similarly to Mazraoui, he’s picked up five major trophies and looks destined to bag many more.

The youngster has shown his class from the moment he first set foot on the pitch. In 2018, he became the youngest ever Ajax player to play in the Eredivisie at 16 years and 130 days. Furthermore, Gravenberch has proven why Erik ten Hag had faith in him.

During his time with the Dutch giants, he’s showcased his confidence on the ball and his ability to pick the perfect pass.

Should he secure the move to Germany, he looks almost destined to further solidify himself as a future great of the sport.