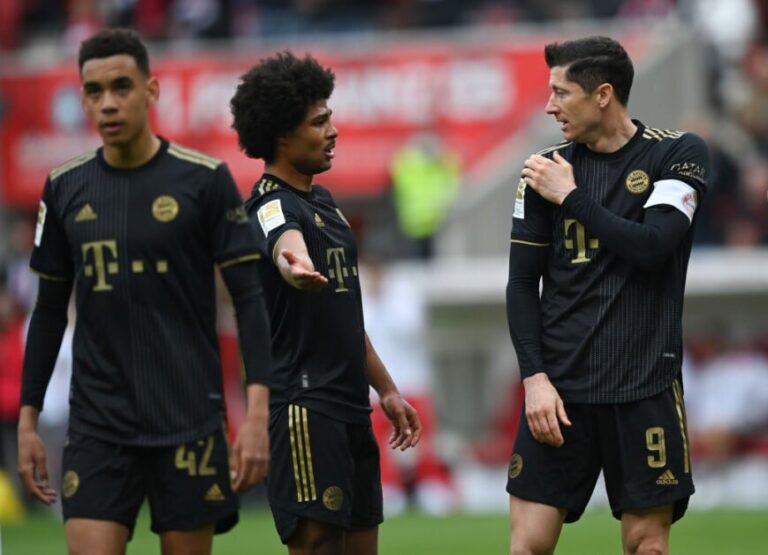 Bayern Munich players have received widespread criticism after they jetted off on holiday to Ibiza following their 3-1 loss to Mainz in the Bundesliga.

Of course, the result had no bearing on Bayern’s league position. The previous weekend, the Bavarian side secured their 10th consecutive Bundesliga title, following a 3-1 win over Borussia Dortmund. However, whilst the league title has become a sort of basic requirement for Bayern, the rest of the season has been underwhelming.

The German giants were humbled in the DFB-Pokal, losing 5-0 to Borussia Monchengladbach in the second round. Therefore, the chance of a league and cup double ended just months into the season. In addition, a shock exit from the Champions League to Villarreal at the quarter-final stage was highly disappointing.

Now, with the league title wrapped up, the players appear to have let their foot off the gas. Despite a goal from Robert Lewandowski, Mainz outclassed the Bavarians and cruised to victory on the weekend.

Read: Thomas Muller promises Schweinsteiger he won’t throw beer on him, does it anyway

The following day, Bayern Munich players boarded a flight to the popular holiday destination Ibiza for a break. All but four of the first team went on the trip, according to Bild – Thomas Muller, Dayot Upamecano, Kingsley Coman and Bouna Sarr.

“It’s absolutely unacceptable, especially after a match like this,” said the former Bayern player (as per Daily Mail).

“If they had won yesterday, I would say ‘stay in Ibiza for three days.’

“If I were (Bayern manager) Nagelsmann, I would take tougher measures. Rest days after such a match [should be] cancelled.”

“I don’t know how a team can say, ‘For us, the season doesn’t go to the end, we finish three weeks beforehand’,” said Magath. “That doesn’t serve the Bundesliga or the competition.

“I would definitely not allow something like that. Something like that would not come to my mind. Let’s see how it goes on. A championship celebration is understandable once, but not for three weeks.”

Following the criticism, the Bavarian side have given some reasoning behind the break.

The club’s sporting director Hasan Salihamidizic fended off the critics, stating that the squad’s trip was in the name of team building.

“Last week, the players informed us that they would like to spend the two days off training in the group in Ibiza,” the sporting director told Sport1. “We accepted this as a team-building measure.

“Our team had set itself even higher goals this season and has been very busy with itself and its future path since being eliminated from the Champions League. We find that positive. As a player, I learned how strength can grow from defeat. Such joint action by the team can be an important basis here.”

If the Ibiza trip is a catalyst for a fantastic 2022/23 season for Bayern Munich, fans and pundits may view the holiday differently.