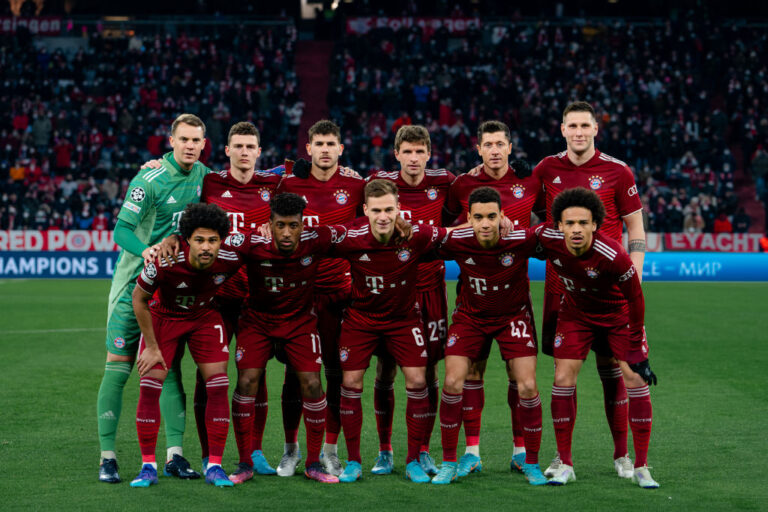 German giants Bayern Munich will wear their 2022/23 home kit when they face VfB Stuttgart in the Bundesliga at the Allianz Arena this Sunday.

The match against Stuttgart is Bayern’s last home match of the season, and clubs often use these as an opportunity to showcase the home kit for the next season.

Julian Nagelsmann’s side have already confirmed their tenth consecutive Bundesliga title this term, with a 12-point lead over second-placed Borussia Dortmund with just two fixtures left to play. Robert Lewandowski has again topped the Bundesliga goalscoring charts, with 34 goals in 32 matches so far.

But despite another season of domestic domination, many Bayern supporters feel somewhat underwhelmed by the campaign.

While successful in the league, Nagelsmann’s side have not progressed in cup competitions as many would have hoped- or expected. Bayern were eliminated from the DFB-Pokal (German League Cup) in the second round. They also bowed out from the Champions League at the quarter-final stage.

Borussia Monchengladbach hammered the German champions 5-0 in the DFB-Pokal, while Villarreal defeated the Bavarian side 2-1 on aggregate.

For a team that, the season prior, had won four trophies (Bundesliga, DFL Supercup, UEFA Supercup, and FIFA Club World Cup), this season is something of a fall from grace. Bayern fans will want a return to the success of their 2019/20 Champions League-winning season.

Will stripes mean success for Bayern?

The kit that Bayern are set to wear this Sunday sees the return of stripes to the kit. The last time the German champions wore stripes was the 2017/18 season. In that season, they won two trophies and reached the semi-finals of the Champions League.

This time, however, the stripes are horizontal. When you look closer, it becomes apparent that the uneven white stripes are woven into the fabric to create a “barcode stripe” design.

Despite Bayern’s sponsor Telekom updating their logo, the kit features the old logo. The new logo will be visible on Bayern Munich kits from the following season.

In addition to the stripes, the new home kit features a return to Bayern’s traditional shade of red. This season, two different shades of red have been used for the home kit; a darker shade as the base, which is accompanied by a more striking shade.

Bayern’s away and third kits have also been leaked. The away kit is touted white with gold accents, and the third kit is black and grey.

The away and third kits have not yet been officially confirmed, but the home kit will be available to buy via the adidas website in early May.