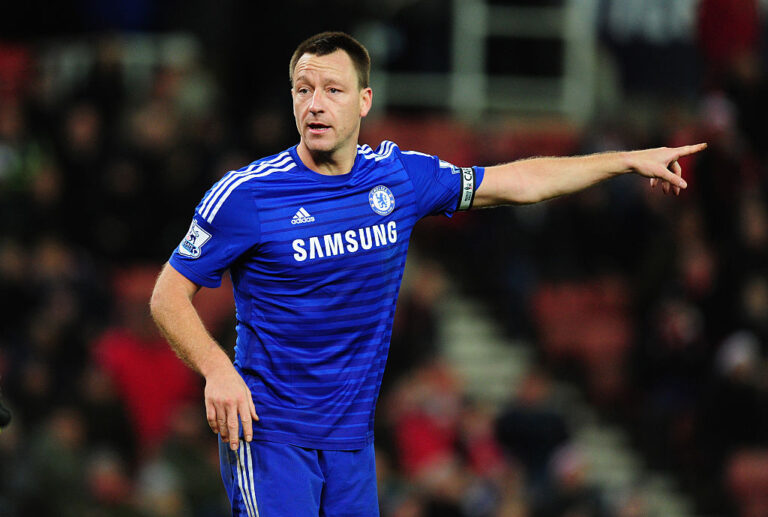 John Terry is one of, if not the greatest ever player in Chelsea’s history.

The stalwart centre-back built a reputation as a no-nonsense defender who led by example. Terry was an indispensable member of Jose Mourinho’s formidable squad from 2004 to 2007, and was equally as important when the Portuguese manager returned to the club in 2013.

During his time at Chelsea, Terry accumulated an impressive 492 appearances, scoring 41 goals. In addition, the centre-back won 17 trophies in total, with five of those being Premier League titles.

Individually, Terry was named in the FIFA FIFPro World XI in five consecutive seasons from 2005 to 2009. But perhaps his most significant achievement with Chelsea’s Champions League success in 2012.

Chelsea defeated Bayern Munich in the final, and Terry lifted the Blues’ first-ever Champions League trophy, despite missing the final through suspension. The trophy underlined an impressive season, in which the centre-back made 44 appearances in all competitions.

However, the following season saw the England international plagued by injuries, and Terry only managed 14 Premier League starts. His struggles increased following the arrival of Rafael Benitez at Stamford Bridge, who took over in November 2012.

The Spaniard was placed in interim charge at Chelsea after the sacking of Roberto Di Matteo. Remarkably, former Liverpool manager Benitez steadied the ship. The Spaniard even went on to win the Europa League with the Blues.

His side defeated Benfica in the final to make Chelsea the first English team to have won all three major European trophies. Terry, however, didn’t feature in this match and now claims that Benitez attempted to force him out of the club the following summer.

Terry says Benitez wanted him to be sold by Chelsea

The Chelsea legend posted an image on his Instagram of him holding the Premier League trophy with the words:

“Champions 2015. I played every minute of every single game the season after Rafa told the club I had to go, and I couldn’t play two games a week….

“I then had a phone call from Jose Mourinho telling me he was coming home, and I was his Captain.”

Jose Mourinho arrived back at Chelsea that summer, and in the two seasons following, Terry played 47 and 49 games, respectively. The Blues won the Premier League, and League Cup double in Mourinho’s second season back at the club, and Terry lifted both trophies as captain.