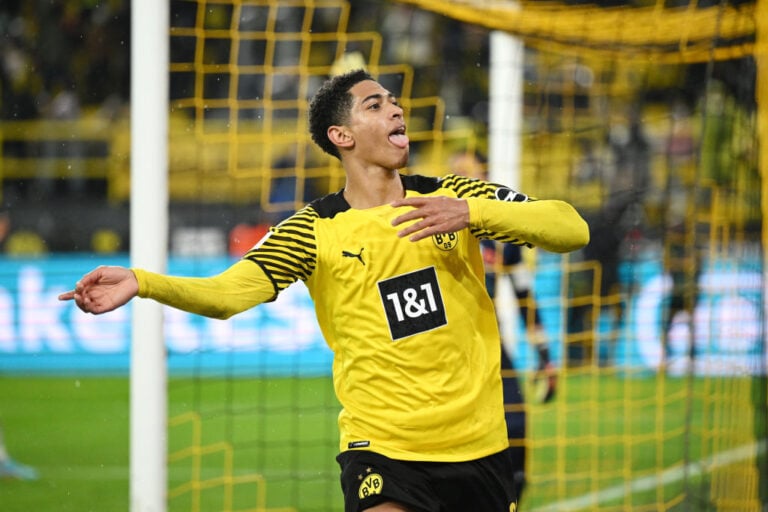 Current Bundesliga champs Bayern come into the game with a comfortable nine-point lead over second place. With a win at home to Dortmund, the Bavarian side will secure an incredible tenth successive Bundesliga title.

As a result, Borussia Dortmund will be desperate to prevent Munich from starting their title party early. Coming off of a 6-1 victory over Wolfsburg, Dortmund will hope that the return of Erling Haaland from injury can fire them to a win.

With that in mind, who makes a combined starting team from the two sides? Using a 4-2-2-2 formation, here are our picks.

Still one of the best goalkeepers in the world, Manuel Neuer was a shoo-in for this combined XI. He leads the league in clean sheets, with ten from his 25 appearances.

Although sometimes used at the heart of Bayern’s defence, Benjamin Pavard is a solid right-back for the Bundesliga champions. In addition, he is another perfect link on FIFA to his defensive partners Upamecano and Hernandez.

Both Bayern and Dortmund have suffered from injuries and rotation in their defences, meaning this position was a toss-up between Mats Hummels, Niklas Sule, and Lucas Hernandez. We have gone for the Frenchman, who, of course, gets a perfect link to Upamecano for the FIFA players out there.

Hernandez has an impressive pass completion rate of 89.7% – evidence of his involvement in building attacks from the back.

A summer signing from RB Leipzig, Upamecano has been one of the more regular centre-backs in a heavily rotated Bayern defence. The Frenchman has earned two man of the match awards this season. In addition, he has provided an impressive five assists from the centre of defence.

Here is where it starts to get tricky and a bit one-sided. Canadian Alphonso Davies has recently returned to football. Before, he had a scary heart problem that sidelined him for months.

When fully fit, the left-back is one of the best in his position. His devastating pace and quick feet make him a nightmare in both attack and defence.

Dortmund fans are understandably very excited about the 18-year-old Jude Bellingham. England fans should be, too, as this tremendous talent is already up there as one of the best midfielders in the Bundesliga.

He has featured in 28 of Borussia’s 30 league games, a mainstay in a talented midfield.

One of the best midfielders in world football, Joshua Kimmich is the glue that holds this Bayern side together. Sometimes used as a right-back, the German is best suited to a holding midfield role. He is also Sofascore’s highest-rated player on average this season at 7.81/10 – a testament to his consistency.

After so much time lost on the treatment table, it is nice to see Marco Reus enjoying football and playing well again. He has provided nine goals and ten assists for his side so far this season.

In addition, the German had an incredible performance in Dortmund’s 6-0 demolition of Borussia Monchengladbach. Reus was involved in five of the goals, scoring two and assisting three.

The prototypical raumdeuter. Thomas Muller is having a stellar season, leading the German top-flight in assists with 16. He is instrumental in the Bundesliga champion’s play through his unique ability to find space and read attacks. Muller was yet another easy choice in this Bayern – Dortmund combined XI.

Despite an injury-hit season, Erling Haaland definitely makes the XI. Still somehow only 21-years-old, the Norwegian has a prolific goal record. In 85 total games for Borussia Dortmund, Haaland has 82 goals and 23 assists – video game numbers.

The easiest choice of the lot. The mercurial Lewandowski leads the league in scoring with a staggering 32 goals from 30 games.

Arguably the best number nine in the world (surely a choice between him and Benzema), the Bayern frontman is first on the team sheet.

So, there you have it. That is our Bayern – Dortmund combined XI. Do you agree with it? Who would you choose?