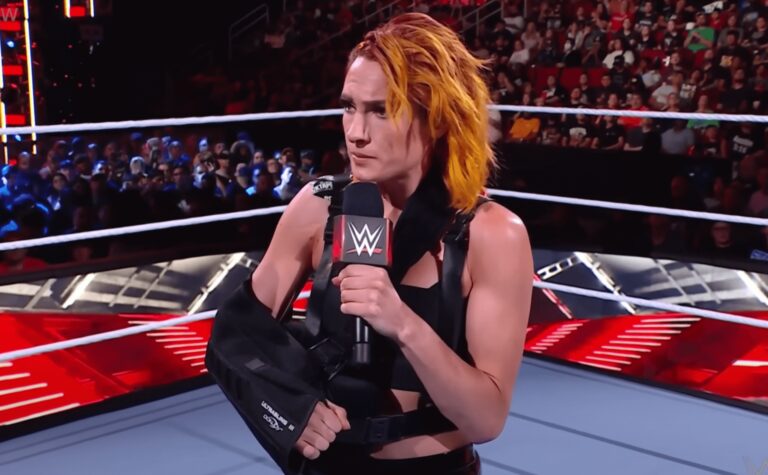 Becky Lynch opened the latest episode of Raw on Monday night to confirm that she suffered a serious injury against Bianca Belair at SummerSlam.

Lynch also opened the show in Nashville, Tennessee, losing against Belair in a Raw Women’s Championship match that was considered to be the conclusion of their year-long feud.

Fans speculated whether this would lead to a future feud between the five women. However, they also spotted a nasty-looking potential injury to Lynch’s shoulder, which occurred during the SummerSlam match.

What is the injury suffered by Becky Lynch?

WWE issued no public statement on any injury suffered by Becky Lynch, until after ‘The Man’ confirmed it herself on Raw.

The former Raw Women’s Champion revealed that she did indeed suffer a separated shoulder during the match.

She did not specifically state how long she would be absent. However, as per WrestlingNews, WWE then aired a clip of Bayley, Dakota Kai and Iyo Sky attacking Lynch backstage as a way to write her off television.

The footage then cut to her receiving treatment in the medical room. Asuka and Alexa Bliss would side with Bianca Belair later on in the show.

The company then confirmed on Twitter that Lynch is expected to be out for ‘several months’.

The injury comes at a bad time for the Irish Superstar. On September 6, WWE will travel to Cardiff, Wales, for Clash at the Castle, the first UK-based premium live event that the company has held in 30 years.

It wouldn’t be a surprise if Lynch did make an appearance at the event. However, judging by this news, it seems highly unlikely that she will wrestle.