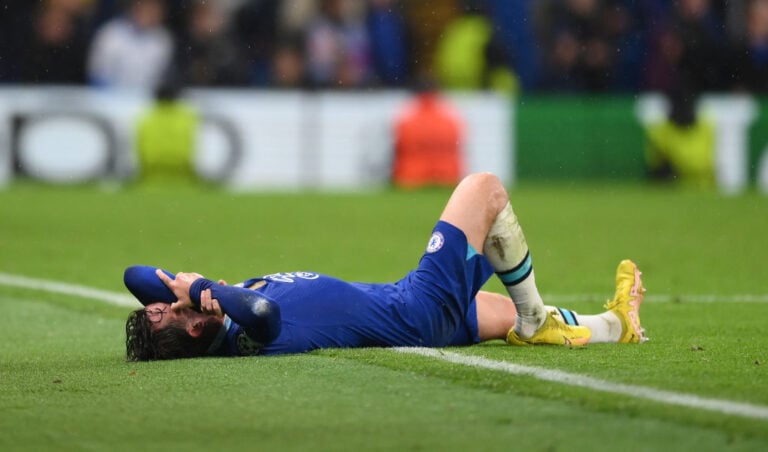 Ben Chilwell gave Gareth Southgate a further headache ahead of the World Cup as the Chelsea defender picked up an injury last night.

Chilwell suffered a hamstring injury in the closing stages of Chelsea’s 2-1 win over Dinamo Zagreb in the Champions League. As the game drifted into injury time, the defender grabbed the back of his leg in pain – indicating a serious problem.

Speaking about the injury after the game, Blues boss Graham Potter was not optimistic about Ben Chilwell.

“It’s not great,” conceded Potter, via Sky Sports. “Obviously, when he pulls up like that, it’s a concern. We need to scan it, but it’s not positive, at the moment.

When asked if missing the World Cup is a concern for Chilwell, Potter added: “Yes, I think you’d have to say so.”

This hamstring issue is yet another blow for Ben Chilwell, who missed the majority of last season with a cruciate ligament injury.

Further disappointment comes in the form of the World Cup. The Chelsea star, if fit, would be pushing for a starting spot in the England team. He typically competes against Man United’s Luke Shaw – but he will likely have an open run at the left-back place now.

With England’s first group game less than three weeks away, manager Gareth Southgate is still sweating on the fitness of numerous players.

Another Chelsea defender, Reece James, already faces an extended injury lay-off. He suffered a knee issue a few weeks ago which rules him out of the group stages in Qatar. Therefore, Southgate will have to consider whether he wants to use a crucial 26-man squad spot on James.

Elsewhere, Man City pair Kyle Walker and Kalvin Phillips add further decisions to the manager’s list. Midfielder Phillips is still recovering from shoulder surgery which he had in September. Walker, meanwhile, is still on the sidelines after picking up an issue in the Manchester derby last month.

But some good news on the City pair comes from their club manager, Pep Guardiola. Per Metro, Guardiola has said that Phillips and Walker are “likely” to be fit for World Cup selection.

Additionally, an initial injury fear looks to be okay after all with regards to Arsenal’s Bukayo Saka. He exited the Gunners’ 5-0 win over Nottingham Forest in the first half due to an apparent ankle issue.

However, medical tests have allayed those concerns, suggesting the problem is not as severe as initially thought. Saka could even return to club action before joining up with the England squad for Qatar later this month.

All these issues, and a packed fixture schedule, cause concern, though. With the Three Lion’s opening match against Iran just 17 days away, there have been calls for the cancellation of some club fixtures.

Speaking on talkSPORT, former Spurs midfielder Jamie O’Hara has suggested that the Premier League should remove their final round of fixtures before their stars jet off to Qatar.

O’Hara firstly mentioned how the packed schedule is taking a toll on the players themselves.

“You’ve lost Reece James and Ben Chilwell, but for England, it’s [injuries] are a serious problem,” said O’Hara, via talkSPORT. “Players are dropping like flies. We keep going on about the number of fixtures they have to squeeze in before the World Cup starts – and big games, too.

“The last Champions League group game is meant to be played in the second week of December [rather than last night]. The big players have had to play in these games to get the club through.”

Ultimately, the former pro has called on those running the Premier League to do something to help the players.

“Cancel the last round of games in the Premier League,” added O’Hara. “Give them a bit of breathing space. The Premier League should do it, or the players should get involved. But this is the problem with the League. It’s all about money, about getting the revenue in. Players are not being protected.

“There are too many games and too many injuries, so England are going to suffer.”

Most sides still have two Premier League fixtures left to play, as well as a Carabao Cup round-three tie. As a result, many fans and managers will be watching apprehensively, hoping that their star players remain healthy before the World Cup.