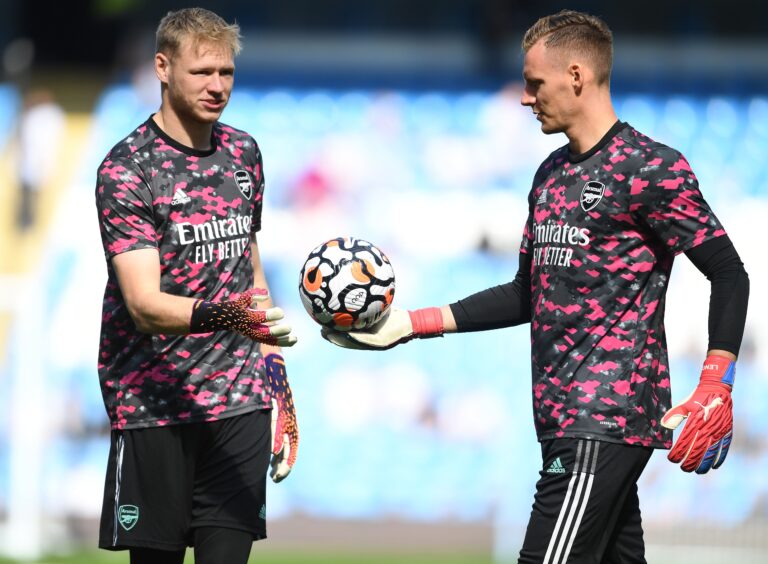 Arsenal goalkeeper Bernd Leno says he feels “comfortable” in London and is not currently “seriously dealing” with any interest from other clubs.

Leno has been linked with a move to Serie A champions Inter Milan, with the club potentially on the lookout for a replacement for 37-year-old Samir Handanovic.

The German goalkeeper has not featured in any of Arsenal’s last three Premier League games, with new signing Aaron Ramsdale favoured by manager Mikel Arteta between the sticks.

Ramsdale has been impressive during his first few outings in an Arsenal shirt. The goal he conceded in the Gunners’ 3-1 win over Tottenham Hotspur in the North London Derby last weekend was his first in four appearances for the club in all competitions.

His form has left Leno’s position at the club unclear. With his current contract due to expire in the summer, other clubs are seemingly keen on signing him.

Speaking to German outlet Sport Bild about rumours linking him with Inter, Leno said: “London is very beautiful, Milan is not bad either and closer to my home in Stuttgart.

“But I’m not seriously dealing with that yet. I feel comfortable at Arsenal and in London.

“Only if nothing would change in my situation until winter, I would have to think: ‘What option do I have, how can it continue?’ But I concentrate on the work in training everything else I can not influence today.”

The 29-year-old added that he has been given “no clear rationale” as to why he has been left out of the Gunners side in favour of Ramsdale – but says it is not performance-related.

“There was no clear rationale as to why I was out, only that it had nothing to do with my performance,” he stated.

“He [Arteta] is the coach, he decides. For me, of course, it’s difficult.”

Leno went on to say: “I honestly wasn’t surprised about the signing of Aaron Ramsdale, even though it cost almost €30 million.

“The sum may seem high in Germany, but here it is – as strange as it sounds – almost normal.”

Arsenal are next in action on Saturday. They travel to the Amex Stadium to take on Brighton in the Premier League.

Arteta’s side go into the game off the back of a three-game unbeaten run in the league. They have defeated Norwich, Burnley and Tottenham.