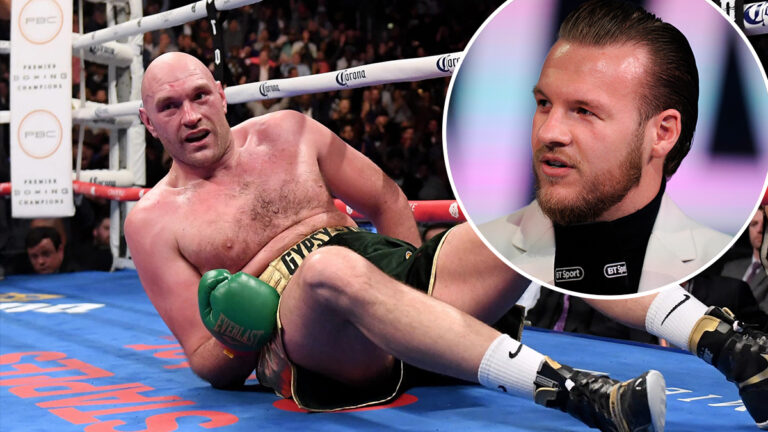 Tyson Fury shocked the world when he somehow managed to drag himself up from the canvas after being dropped by Wilder’s right hand in the 12th round.

That same right hand has finished off just about everyone before him, earning Wilder the reputation of the most dangerous man in the heavyweight division today – while making Fury’s miraculous rise all the more impressive.

Up until that moment, Fury seemed to be winning the fight fairly comfortably. His former trainer Ben Davison, the man largely credited with the Mancunian fighter’s comeback, believes he knows why he was caught with that shot in the final round.

Speaking ahead of the rematch, Davison suggested it was all down to a habit of Fury’s that Wilder’s team had picked up on.

His theory focused on the ‘reset’ technique used by the Gypsy King. According to Davison, he “touches his face and wipes his nose” as a way to regain composure in the ring.

“Something happened at the end of the eighth round. He wiped his nose and there was a bit of a reset.” ?

Incredible insight from @BenDavison_ in our Fight Breakdown: #WilderFury2 special…

“Fighters have habits and tendencies and that’s what you look for as a trainer,” he told BT Sport.

“If you do something too often and for too long at the top level, you’ll be made to pay for it.

“What Wilder does is he bounces on the spot, not back and forward, but on the spot and it’s a mental reset. For Tyson, it’s when he touches his face and wipes his nose and I know Wilder worked on that and went to throw.”

“Something happened at the end of the eighth round: when Tyson got hit with a right hand on the top of his head, he wiped his nose, touched his face, a bit of a reset,

“Then in the 12th there was space behind Tyson to step into to take the distance away but he didn’t do it, and I believe it was a single lapse in concentration because of the habit,

“It’s something to be aware of; when he’s training and he does it, add a step on it or add a reset where he moves, changes position and it takes it away. It’s something Wilder’s team was aware of and worked on.”

Fury and Wilder will meet for their highly-anticipated rematch on February 22 – here’s everything you need to know about the fight.