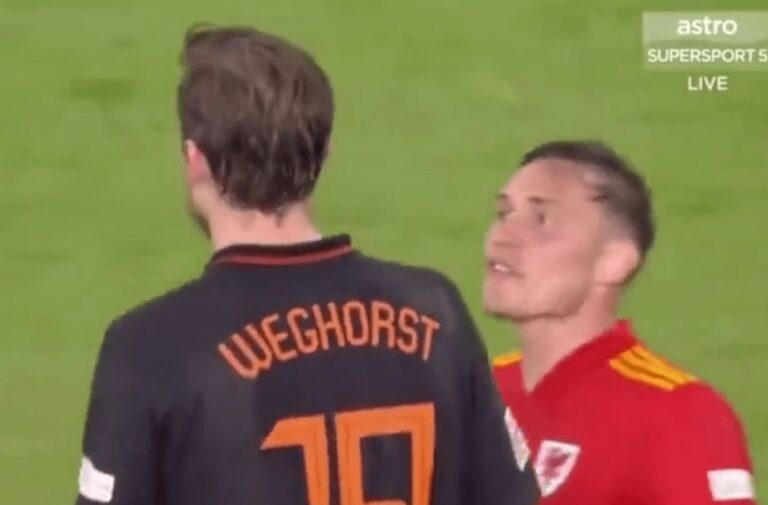 Burnley team-mates Connor Roberts and Wout Weghorst were locked in a war of words following the Dutchman’s late winner against Wales in the UEFA Nations League on Wednesday night.

Roberts appeared to criticise the Dutch forward, and a tense exchange followed.

On Wednesday night, Wales hosted the Netherlands in Group D of the Nations League. Buoyed by their recent qualification for the Qatar 2022 World Cup, Wales put up a stern fight against a talented Dutch side.

Both sides remained locked at 0-0 at half-time, after a tense first half. But just five minutes after the restart, midfielder Teun Koopmeiners gave Louis van Gaal’s team the lead.

In the dying stages, Rhys Norrington-Davies equaliser looked to have salvaged a point for the hosts before Weghorst struck even later.

In the 94th minute, the giant Dutchman scored a superb diving header to snatch the result away from Rob Page‘s side.

After signing for Burnley for £12 million in January last season, Weghorst scored two goals and got three assists in 20 Premier League matches.

Unfortunately, the Dutchman could not score the goals required to save the Clarets from slipping into the Championship. And now, he looks set to move again.

He told Dutch publication Voetbal International: “We have clearly agreed in advance that I will not play in the Championship.

“The club would like to keep me and will do everything they can to return to the Premier League as soon as possible.

“There is interest from Germany, England, and Turkey. First, I will focus on Oranje [the Dutch national side] here and perform as well as possible. Then we’ll talk to Burnley about what’s next.”

Following Weghorst’s winner against Wales, his Burnley team-mate Roberts approached him to chat.

As per the Daily Mail, Roberts appears to tell his club team-mate after his winner: ‘Why didn’t you do that for Burnley?’

Weghorst then responds: ‘This isn’t about Burnley, shut up.’

The disagreement between the pair doesn’t bode well for Burnley’s dressing room. It is not known whether Roberts was simply joking with Weghorst, or whether he was being critical.

Regardless, the Dutchman’s stern response indicates that whether it was a joke or not, he didn’t see it that way.