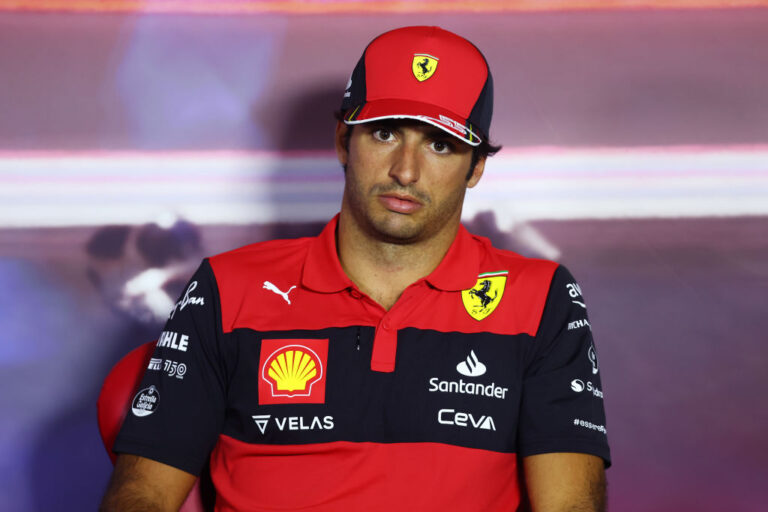 Ferrari’s Carlos Sainz was not happy post-race at the Dutch GP after receiving a penalty – despite swerving to avoid a mechanic during an “unsafe” pit release.

Championship leader, and home favourite, Max Verstappen, took the win at Zandvoort. However, a strong Mercedes showing made it a close one. The Silver Arrows’ initial one-stop strategy had the Dutchman on the backfoot with his two-stopper.

However, a flurry of late cautions caused plenty of tyre changes, with Verstappen’s final stop for the faster softs helping him claim victory.

In contrast, Lewis Hamilton missed an opportunity, staying out on mediums under a late safety car. Those around him switched to softs, so he ultimately went from first to fourth as a result.

Unfortunately for the Tifosi, Carlos Sainz had a disastrous Sunday full of problems.

The Spaniard’s Dutch GP had drama from the outset as he made contact with Lewis Hamilton on the opening lap. Mercifully, the exchange of paint did not cause any damage to Sainz’s car. But that is about as much luck as he got in the race.

On lap 14, the Ferrari pit wall called Sainz in for his first stop – though they had not told the mechanics. The Scuderia were not ready for their driver’s arrival. So, Sainz sat there for 10 seconds whilst his team retrieved a rear left tyre from the garage.

This gaffe put Sainz behind both Perez and the pair of Mercedes.

With hopes of a podium fading away, a late safety car offered up the chance to gain ground on those ahead. But, yet again, more misfortune fell on the Ferrari driver.

Following a smooth pit stop, Ferrari released Sainz back into the action as quickly as possible. In their haste, they released him directly in front of Fernando Alonso. The Alpine driver had to slam on his brakes and briefly touched Sainz’s rear wheel.

This was an apparently clear-cut unsafe release, therefore Carlos Sainz received a five-second penalty. But another angle showed that it wasn’t perhaps as clear-cut as it looked initially.

After the Grand Prix, Sainz expressed his annoyance at the perceived infringement.

The Ferrari man was unimpressed at his five-second penalty, which dropped him down to P8. He then explained why he had to slow before getting back into the pit “fast” lane.

“I saw it in the car,” said Sainz, via The Mirror. “By the time they released me it was clearly safe with Fernando [Alonso]. But then I had to hit the brakes to not hit the McLaren mechanic who ran in my exit line.

“It was this braking that generated the unsafe release – if you can call it unsafe, because I was clearly frustrated by it. I thought I had saved someone’s life, and not made a dangerous situation.”

Carlos Sainz also hinted that Alonso had oversold the incident to make sure that he got a penalty.

“He [Alonso] hit me because I had to brake as I had a McLaren mechanic in my way. You need to analyse every situation and by the time I was released by the mechanics, he was pretty far behind.

“The problem was this McLaren mechanic with a jack that ran into my driving line. I had to brake, and I didn’t get my pit exit right. Is it my fault? Is it my team’s fault? No. I had to hit my brakes and I am sure Fernando also exaggerated a bit, hitting me to try and get me a penalty.”

Due to the hectic schedule, Sainz does not have long to put this unlucky race behind him. F1 goes to Ferrari’s home race next weekend for the Italian Grand Prix at Monza.