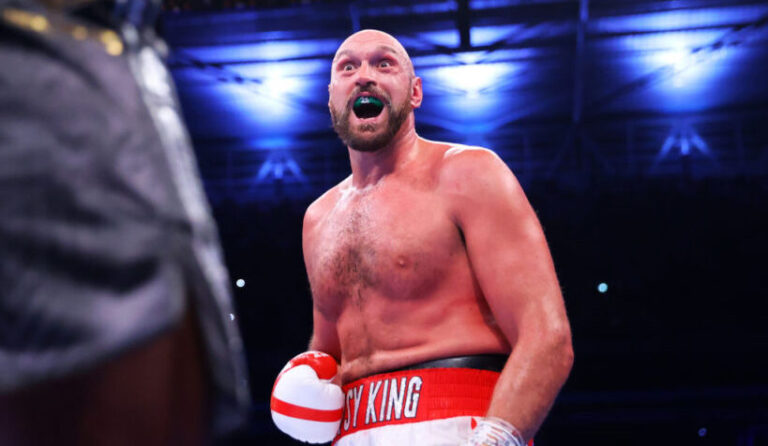 Tyson Fury may have captured the headlines for his antics at WWE Clash at the Castle, but the heavyweight champion hasn’t taken his focus off Oleksandr Usyk yet, or his next fight.

On September 3, the biggest show in UK wrestling history arrived at the Principality Stadium in Cardiff, Wales. And with the likes of Edge, Rey Mysterio and Sheamus on the bill, the event couldn’t fail to deliver.

And throughout the night, fans were teased with a couple of appearances from ‘The Gypsy King’. Not only was the boxer sitting ringside, but he also appeared backstage with main eventers, Drew McIntyre and Roman Reigns.

The pair of wrestling icons traded leather until both men were rendered flat on the canvas. This lull in the action gave Austin Theory an opportunity to cash in his Money in the Bank briefcase. However, he failed to anticipate the brutal right hand heading in his direction. Fury knocked the wrestler out cold to prevent him from becoming world champion.

But despite the boxer’s efforts, Reigns retained his belt. And in an attempt to raise the spirits of the fallen Scotsman, the WBC heavyweight champion sang his trademark ‘American Pie’ to a sea of British fans. However, following the event, his focus switched back to the ‘sweet science’, and he made his feelings on his next fight very clear.

When the 6ft 9in giant defeated Dillian Whyte in April, he appeared to retire from the sport. But following the Ukrainian southpaw’s clinic over Anthony Joshua, boxing enthusiasts are salivating over a match-up between the two boxing geniuses.

And in an interview with esteemed journalist Ariel Helwani for BT Sport, Fury challenged his rival to meet him in the ring.

He said: “I saw a video from the middleweight who just beat the bodybuilder, saying he wanted to fight me. I replied straight away to say, ‘Let’s fight’. And now, he doesn’t want to fight. He let his mouth go, and now he’s running scared like a little b**ch. That’s what he is.

“He says he wants to fight next year. He has some injuries from that sparring contest he had. So I can’t really do much about it. I’m going to be fighting very soon against I don’t know who. We’re still looking for an opponent.”

Later in the interview, Fury confirmed that he did have an announcement date in mind: “I think it’s going to get announced next week. I know who I am fighting, and where I am fighting. It’ll be announced maybe next week. I can’t tell you who it is, because there would be no point in having a press conference next week.”

If Usyk isn’t Fury’s next foe, who is?

The boxer has recently gone back and forth on Instagram with Manuel Charr, who has been linked with a bout with Fury in the past. However, we have no idea of knowing exactly who Frank Warren has in store for his premier heavyweight.