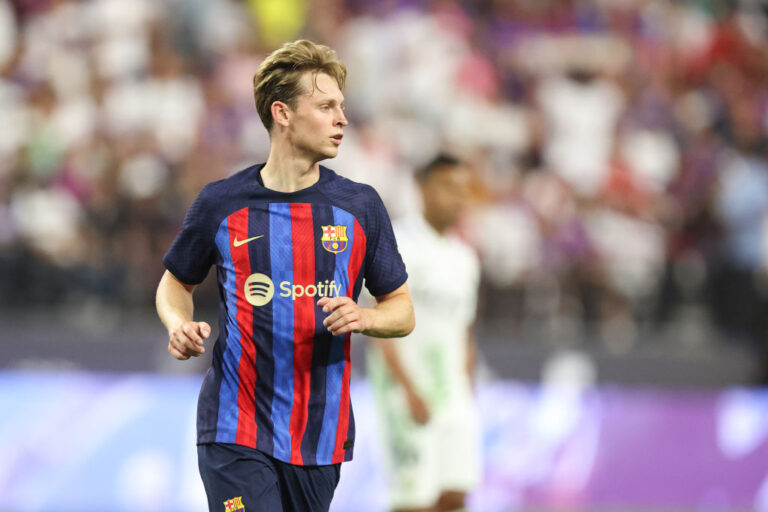 While Man United have pursued Barcelona midfielder Frenkie de Jong for the majority of the summer transfer window, Chelsea have emerged as the Dutchman’s most likely destination.

The former Ajax talent would prefer to remain at Barcelona, but the Catalans’ financial issues mean he is being pushed towards an exit. United looked to be the frontrunners.

A reunion with former boss Erik ten Hag looked too good to turn down, but the deal has rumbled on for months. There are other issues too.

Barcelona owe De Jong a lot of wages. The midfielder, like many other players, took a deferred salary during the Covid-19 pandemic and is yet to have been reimbursed.

It is thought the Spanish side owed De Jong £17 million and are reluctant to sell the midfielder for less than their £71 million.

Couple this with the fact that Barcelona have brought in several talents in this window for big fees, and it’s easy to see why De Jong would be annoyed.

Robert Lewandowski and Raphinha both arrived at the Camp Nou on high wages, while the club remain in the market this summer. The sale of De Jong is starting to become a necessity rather than a preference.

For a while, it seemed like the Dutchman had two choices: Join United or remain at Barcelona. Links with Man City also emerged, but nothing more materialised.

However, Chelsea, under the new ownership of American billionaire Todd Boehly, have now thrown their hat in the ring. The Blues are eager to strengthen their midfield which features an ageing N’Golo Kante and Jorginho and an injury-prone Mateo Kovacic.

Now, just a week after their interest became public, Chelsea seem to have overtaken the Reds in the race for De Jong.

According to reliable Barcelona journalist Gerard Romero, the Blues are winning the race for the Dutch midfielder.

Since Boehly acquired the club, the Londoners have pursued a number of big names. Kalidou Koulibaly arrived at Stamford Bridge earlier in the window.

Here’s a breakdown of their signings in this window so far (as per Transfermarkt):