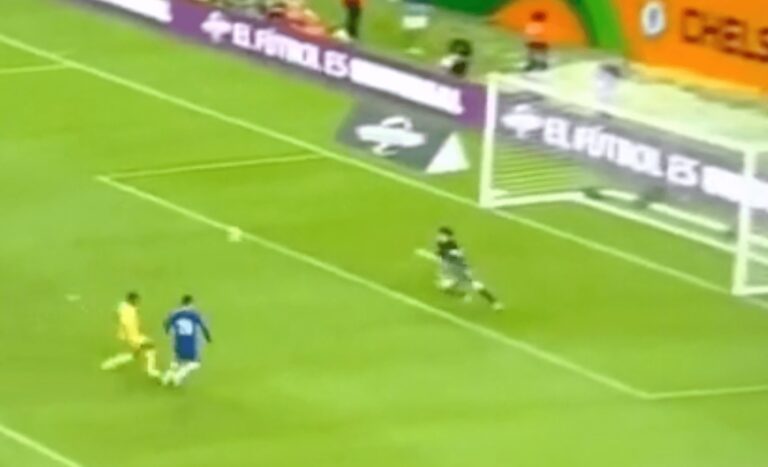 With all the luck in the world, Chelsea fans have forgiven Kai Havertz for a miss during a friendly as he somehow completed one of the greatest football trick shots you’ll ever see.

As anticipation builds for the 2022/23 campaign, football clubs are travelling around the globe on their pre-season tours. In addition to testing out new signings, the players are taking their opportunity to regain fitness after a relaxing summer break.

Chelsea have crossed the pond in pursuit of the American dream. So far, that appears to be what they’re getting. On Sunday, they collided with Club America in a terrific encounter.

Following a plethora of chances, The Blues eventually took the lead in the 55th minute via Timo Werner. However, just moments later, Reece James put a little too much venom on a back pass. Consequently, Kepa Arrizabalaga found himself in no man’s land. And, just like that, the Mexicans were back in the game.

Slowly but surely, the seconds began to tick away. Thus, it looked like the North London club might have to settle for a draw. Then, in the 83rd minute, Mason Mount hit an absolute thunderbolt from way outside the box to clinch the victory for his side.

Chelsea will now continue their tour with fixtures against Arsenal and MLS outfit Charlotte FC. But while fans are excited about the next game, an amusing moment from the last fixture has captured most of their attention.

Kai Havertz makes the headlines for a ridiculous trick shot

During the entertaining fixture, Kai Havertz burst past the defence and left himself with a simple one-on-one. However, he fired his effort well wide.

But, despite missing the actual target, he hit a different target instead. In a moment of magic, the ball bounced off the backboard behind the net and landed perfectly in a nearby small bucket.

If anything, the entirely accidental effort seems to have actually gained more publicity than Mount’s 30-yard wonder goal.