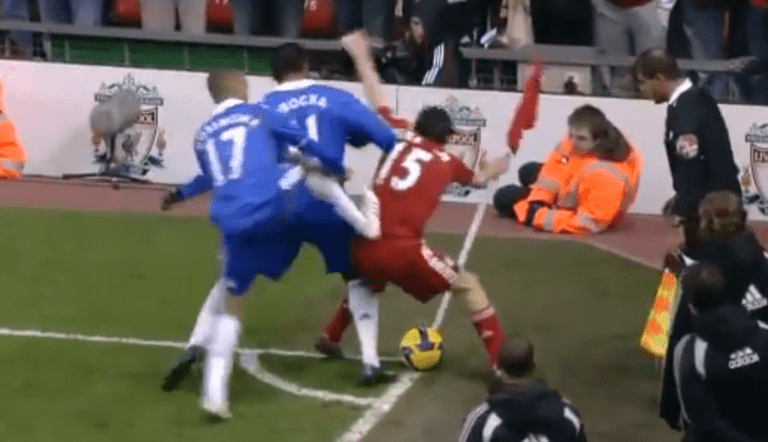 A bizarre clip has resurfaced of former Chelsea defender Jose Bosingwa getting a free-kick despite stamping on an opponent.

The incident occurred during a Premier League match against Liverpool at Anfield in February 2009. However, the footage has been doing the rounds on Twitter, racking up thousands of disbelieving interactions over the last 24 hours.

Liverpool led 1-0 as the game entered stoppage time, with Yossi Benayoun elected to hold the ball in the corner to help protect their advantage.

Bosingwa, however, wasn’t keen to allow that to continue, and stamped on Benayoun’s back.

If such an incident had occurred in the current era of VAR, the Portuguese right-back would no doubt have been shown his marching orders instantly.

However, linesman Mo Matadar instead signalled for a Chelsea free-kick despite the stamp. Bosingwa escaped punishment.

Although referee Mike Riley did not see the incident, the FA couldn’t retrospectively punish Bosingwa under FIFA laws because the linesman had witnessed it.

There was outrage at the time over the decision, and some called for FIFA’s laws to be changed.

The game had already seen its fair share of action before Bosingwa’s stamp.

Frank Lampard had been shown a red card for a foul on Liverpool’s Xabi Alonso – although it was later rescinded by the FA.

Then Fernando Torres scored an 89th minute opener for the Reds with a header that flew past Petr Cech at the near post.

The Spaniard then added a second deep in stoppage time to seal the victory for Rafael Benitez’s men.

The game itself is always remembered for Torres’s individual display, but also for Bosingwa’s shocking challenge as well.

He was, in fact, only sent off once during his Chelsea career, back in the 2011/12 season. However, he did receive a three-match European ban a few months after the Benayoun incident.

Bosingwa made post-match comments about the referee following the Blues’ Champions League semi-final exit against Barcelona. The ban was later reduced to two matches following an appeal.