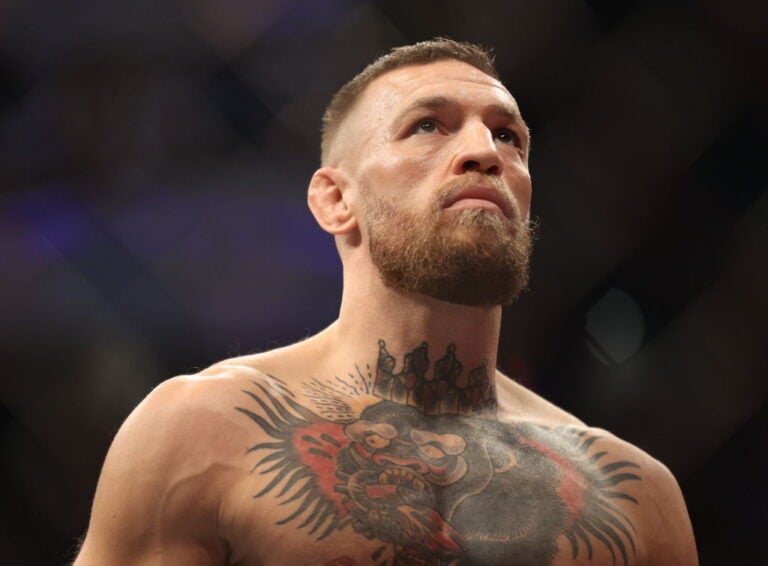 Conor McGregor is officially back in training. The Irishman is currently on the hunt to secure his next UFC opponent.

In July, the Dubliner broke his tibia at the end of the opening round of his defeat to Dustin Poirier at UFC 264. However, McGregor might return to the cage sooner than first thought. Training footage has emerged of him looking explosive on the pads.

McGregor has undergone successful surgery and is looking likely to return in the first half of 2022. But who could that opponent be? Let’s take a look at his five most salivating options.

Stockton’s most infamous brothers offer exciting propositions for Mcgregor’s next fight. A potential trilogy bout between the former UFC champion and the younger Diaz brother would capture the imagination of the general sports fan. With the score currently tied at 1-1, a third bout is the only logical way to end one of the greatest rivalries in UFC history.

Although the pair have already shared two great battles, McGregor could be more interested in Nate’s elder brother, Nick. Despite coming off a loss to Robbie Lawler at UFC 266, the Californian has expressed an interest in setting foot back in the cage.

A fight between two of the sport’s biggest stars would guarantee excitement. Furthermore, the narrative of Nick stepping up to avenge his brother’s loss would captivate fight fans.

The Hawaiian native lost comprehensively to McGregor in 2013, but the featherweight’s rise through the ranks may grant him another opportunity. Holloway has a fight on Saturday night with Yair Rodriguez, but a big-money rematch could be on the horizon if he can get through that.

Holloway added fuel to the fire by discussing his rivalry with McGregor at yesterday’s media day.

He said: “I’ve got a win over the 155 champ. Right now, I’m on a shortlist for Conor McGregor. I’m the best boxer in the UFC. With wild fights being made, in times like these, I’ll let you guys use your imagination. That’s all I’m going to say about it.”

The former three-time Bellator champion may have lost to Justin Gaethje last weekend, but his phenomenal performance could have secured him the biggest fight of his life.

Chandler’s wrestling pedigree, combined with his monstrous punching power, could cause McGregor problems. However, the Irishman’s superior boxing ability makes this potential battle an intriguing prospect.

On Monday, Chandler tweeted a cryptic image of the pair facing off.

The Notorious quickly responded: “I’m down at some stage for sure. Great fight the other night Mike, congrats!”

Masvidal and Leon Edwards were due to settle their rivalry at UFC 269. However, ‘Gamebred’ has had to pull out of the bout due to injury. With the Brit likely to be rescheduled to get his elusive title shot against Kamaru Usman, the Miami man may need to find a new opponent.

Luckily for Masvidal, the timing of his return could match up perfectly to make him Conor McGregor’s next fight. The UFC would love to put the two biggest PPV draws together in a war that would grab the world’s attention.

The build-up to a contest between the Irishman and Masvidal would be nothing short of incredible. It would be the perfect bout for the BMF belt to make its resurgence.

Although the Louisiana man is preparing for his second world title shot in December, he won’t have forgotten about his biggest rival. Poirier was dominant in both the second and third fights with McGregor. However, the leg injury combined with the Dubliner’s disrespectful onslaught against his family could provide the perfect ingredients to make a fourth fight between the pair.

The President of the UFC, Dana White, is adamant that the book is not closed between the two fighters. Providing Poirier emerges as the champion against Charles Oliveira at UFC 269, a final battle between the pair, with the belt on the line, might be the only option for both men.

Read: Why was Dillon Dannis thrown out of UFC 268?