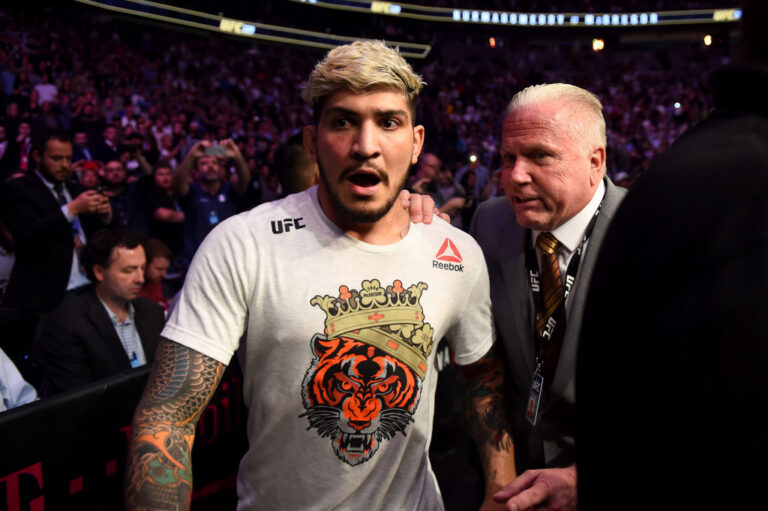 Controversial MMA fighter Dillon Danis made headlines for the wrong reasons once again at UFC 268.

Danis had been in attendance to watch the event but it wasn’t long before he got into trouble. The UFC ejected the Bellator star from Madison Square Garden due to the altercation with Ali Abdelaziz. It was no surprise that the two men couldn’t contain their anger, as two-time Olympic gold medalist Kayla Harrison had to separate them earlier this year.

Danis spent fight week taunting former UFC middleweight champion Michael Bisping. Despite being significantly smaller, the American claimed that he was going to track the Brit down.

When the pair ran into one another backstage, Danis claimed that the 185 pounder ‘ran away’ from him. The Clitheroe man took to Twitter to respond in typical Bisping fashion.

In a since-deleted tweet, the Brit wrote: “So pathetic. FYI people, D**** was legit slapped in the face like a b**** backstage and then ejected and banned from all UFC events. Haha.”

Danis entered the world of MMA following an awe-inspiring Brazilian jiu-jitsu career. Most fans expected him to have a big future. They had their hopes boosted when he began training alongside Irish superstar Conor McGregor.

However, it’s Danis’ behaviour outside of the cage that has gained him his massive profile. Even though the grappler has a vast 1.3 million Instagram followers, he has only fought once since his debut in 2018.

In September 2021, Danis suffered his biggest embarrassment to date. He was submitted by a bouncer/part-time chocolatier outside a nightclub in New Jersey. This recent controversy comes as no surprise.

He was linked to a boxing match with YouTuber Jake Paul, but a knee injury prevented him from signing the agreement. Danis also claimed that Paul had a ‘no knock-out’ clause in his contract with Tyron Woodley.

Is Dillon Danis to blame?

Dillon Danis could have been the innocent party in Saturday night’s controversy. This debacle isn’t the first time that Abdelaziz has got physical at an event. At PFL 7 in October 2019, the Egyptian slapped Anthony Pettis’ manager Abe Kawa. Footage also leaked in 2019 of a run-in with his client’s biggest rival, Colby Covington.

With this considered, maybe fans are being harsh on Danis. Regardless, it’s another black stain on the reputation of MMA’s most controversial prospect.