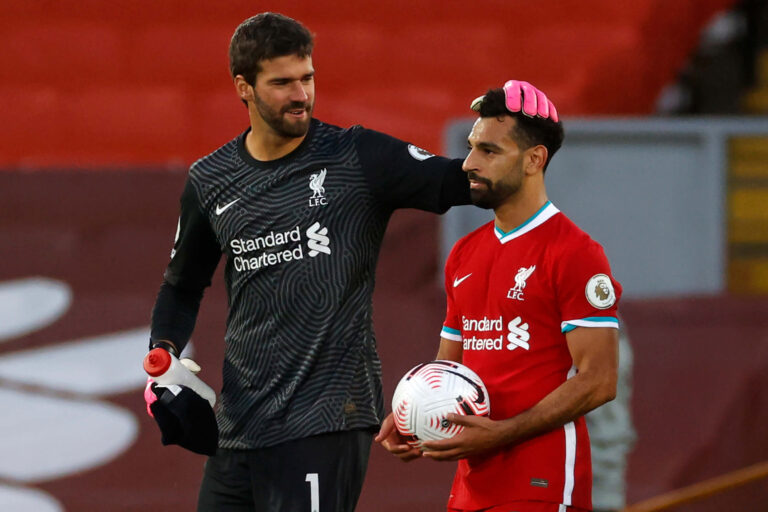 The press officer of Liverpool‘s Alisson has been forced to deny that the goalkeeper has spoken to team-mate Mohamed Salah about Brazil’s controversial president Jair Bolsonaro.

The denial comes after Bolsonaro’s re-election campaign posted a story that Salah followed up his recent hat-trick against Manchester United by praising the president in chats with Alisson, Fabinho and Roberto Firmino.

Brazilian publication Estado de Minas has verified that the post is indeed fake. The same source adds that a similar post – also fake – was uploaded last week. Italy striker Ciro Immobile was the subject on that occasion.

It’s not the first time that football and Bolsonaro have been intertwined – real or fake. Prior to his eventual re-election back in 2018, Brazil legends Ronaldinho, Rivaldo and Kaka (as per Goal) all spoke out in favour of his campaign.

In 2019, he was pictured holding aloft a Santos shirt (above) during their Brasileiro Serie A match against Sao Paulo.

Who is Jair Bolsonaro? Why is he so controversial?

Bolsonaro, who is currently 66 years of age, has been Brazil’s president since January 1, 2019. He was elected as a far-right Social Liberal Party member, with over 55% of the vote. He later left the party and formed the Alliance for Brazil (APB). However, Bolsonaro presently has no affiliation with any party.

The president’s views on certain topics have been the subject of major backlash. He once stated that he was “homophobic – and very proud of it” during an interview. At the start of last month, PinkNews reported that he had mocked LGBT+ rights in WhatsApp messages.

He was also heavily criticised for his response to the Covid-19 pandemic. Brazil has had some of the highest case numbers and death rates of the virus in the world. Over 600,000 people have died in the country. The president has consistently played down the threat of the virus.

Last month, it was recommended by a committee of senators in Brazil that Bolsonaro face charges over his Covid-19 policies, including misuse of public funds and crimes against humanity.

He is set to stand for re-election in October 2022.