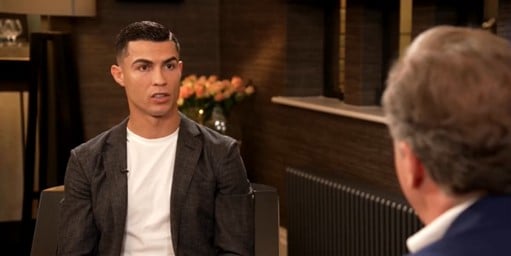 Jamie Carragher has sent a jibe to a trio of former Man United players, saying that they will likely still defend Cristiano Ronaldo despite the Portugal star’s explosive interview comments.

During a bombshell talk with Piers Morgan for TalkTV, Ronaldo explained how he felt that Man United had “betrayed” him. He also laid into current manager Erik ten Hag, as well as criticising his predecessor, Ralf Rangnick.

“Ronaldo: “I don’t respect the manager”,” quoted Carragher. “Ronaldo under ETH [Erik ten Hag]: Announced he wanted to leave, refused to come on as a substitute, walked off the bench & left before the game had finished.

“99% of United fans will be on the side of ETH, which shows how badly Ronaldo has handled this.”

The former pro-turned-pundit then hinted at certain people who will be in what he thinks is a very small minority supporting Ronaldo.

It will certainly be interesting to see how any of Ferdinand, Keane, and Evra respond to Carragher’s comments. Additionally, whether or not they will defend Ronaldo or Manchester United remains to be seen.

For some, it is hard to defend the forward after some inflammatory comments during his TV appearance.

Cristiano Ronaldo interview: feeling betrayed but wanting the best for the club

In an unprecedented interview, Ronaldo explained his perspective of everything that has happened during his second stint at United. The Sun has published a number of extracts from the interview, which will air later this week.

The Red Devils striker firstly informed fans that they should “listen to the truth” before explaining his feelings to those at the club. Ronaldo says that club execs were trying to force him out the exit door.

“Yes [they were forcing him out],” said Ronaldo, quoted via BBC Sport. “Not only the coach, but another two or three guys around the club. I felt betrayed.”

However, the Portuguese icon stopped short of criticising the club as a whole.

“I want the best for the club. This is why I come to Manchester United. But nothing had changed. I love Man United. I love the fans, they’re always on my side. But if they want to do it differently… they have to change many things.”

Unfortunately, other aspects of the interview also included scathing attacks on coaches and former teammates.

When asked about his rapport with current boss Erik ten Hag, Cristiano Ronaldo was particularly brutal.

But Ronaldo’s damning assessment of United personnel did not stop there. Reflecting on the 2021/22 season, CR7 then blasted the appointment of Ralf Rangnick.

“After Ole [Gunnar Solskjaer], they bring in sport directive Ralf Rangnick, which is something nobody understands,” said Ronaldo via Daily Mail. “This guy is not even a coach. A big club like Man United bringing in a sport director surprised not only me but the world.

“If you’re not even a coach, how are you going to be the boss of Manchester United? I’d never even heard of him.”

During the interview, Piers Morgan asked Cristiano Ronaldo about the criticism that pundits and former pros have levelled at him. This included Wayne Rooney, who has spoken negatively about Ronaldo recently.

In response, Man United’s No.7 suggested that Rooney was jealous of his career.

“I don’t know why he criticises me so badly,” added Ronaldo, via talkSPORT. “Probably because he finished his career and I’m still playing at a high level. I’m not going to say that I’m better-looking than him – which is true…”

Where does Ronaldo go from here?

With these incredible comments, Ronaldo’s time at Man United is surely over. As a result, he and agent Jorge Mendes will likely be busy in the January transfer window.

Fortunately, though, Ronaldo has a month break to cool off from club football. He will be focused on the World Cup, where he will hope to carry Portugal to their first-ever title.

Meanwhile, with such blatant disregard for Man United’s reputation, other teams may be sheepish at adding Ronaldo to their squads. If a club signs him, and it does not work out, what is stopping Ronaldo from doing this again?

Alternatively, does Ronaldo walk away from football after the World Cup? If Portugal do go all the way, what is to stop him from hanging up his boots at the sport’s pinnacle?

One thing is for sure – CR7 will still be making headlines both on and off the pitch in the upcoming weeks.