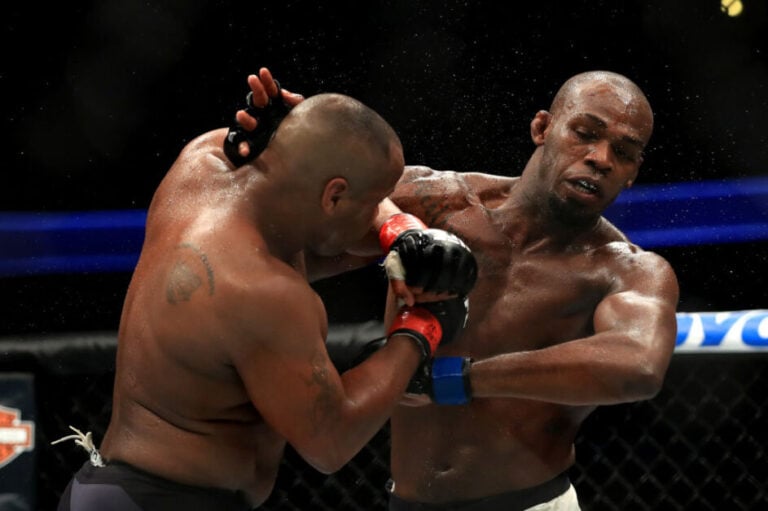 Daniel Cormier has revived his old rivalry with Jon Jones following reports about the latter’s potential contention for the UFC heavyweight championship.

Now retired, Cormier was once one of Jones’s biggest rivals. Famously, the pair got off to a bad start in 2010, when Jones approached Cormier – then taking his first steps in MMA – and cheekily claimed that he could defeat him:

“I don’t know who you are, but my coaches were telling me that you wrestle on the Olympic level.’ And I was like ‘I bet you that I could take you down.‘”

After slowly escalating for four years, their beef came to a head in 2014. In a press event at UFC 178, Jones and Cormier started a brawl that would end up with both fighters paying a hefty fine and doing hours of community service.

The pair finally fought at UFC 182, with Jones taking the victory via unanimous decision. A rematch took place three years later, with Jones victorious once again.

However, ‘Bones’ would later test positive for Turinabol, resulting in the result getting turned out later.

Now, Cormier has cast doubt on Jones’s heavyweight contention. ‘Bones’, Cormier argues, is not on the same level as the top fighters in the category. The former Olympian and UFC champ predicted Jones’s 2022 on the DC & RC Podcast.

“I believe that Jon Jones will fight at heavyweight, and he’ll fight for the belt, but he’ll lose to Ciryl Gane or Francis Ngannou. And I just think that the time away, with the weight difference and those guys being who they are, that’s the problem.”

It’s essential to remember that Jones doesn’t have a fight arranged yet. Unless he has some insider info, Cormier’s prediction is on the adventurous side of things.

Jones’s last fight was two years ago when he successfully defended his light heavyweight title against Dominick Reyes. A prolonged money row with Dana White has kept Jones sidelined for close to two years since he vacated his belt.

Since then, Jones has expressed an interest in moving up to heavyweight. He has teased a return to the ring on social media, but there has been no such thing as an official announcement.

One thing is for sure: Jones won’t keep quiet once he finds out about Cormier’s latest comments.