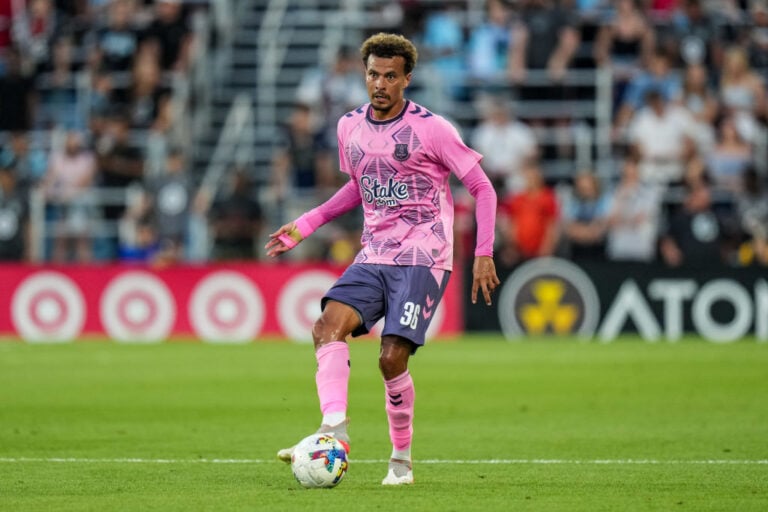 Dele Alli’s turbulent time at Everton hit another low on Wednesday, as the midfielder missed a golden opportunity during the Toffees’ 4-0 loss to Minnesota United.

The former Spurs star has flattered to deceive during his short stay at Everton. Joining in January in a deal that could end up costing the club £40 million, Alli arrived at Goodison Park looking to reignite his career.

It hasn’t quite turned out that way.

In the second half of last season, Alli started in the Premier League for Everton only twice. He failed to score or assist in that time.

With Frank Lampard’s side fighting relegation and Alli often criticised for his poor work rate, the midfielder didn’t get much of a look in. But could next season be different?

The 2022/23 season will be Alli’s first full season at Goodison Park, and he will hope that he can have a bigger impact than the last term. His talent is undoubted, but it remains to be seen whether Lampard can reignite the midfielder’s stalling career.

The exit of Richarlison bodes well for the England international, and Alli could well fill his shoes and become a fan favourite for the Toffees. If Alli can rediscover the form he showed during the early years of his Spurs career, he will prove to be a vital asset for Lampard.

Despite the optimism surrounding what could be an important season for both Alli and Everton, they haven’t exactly pulled up trees during their pre-season to date.

Two pre-season friendlies, two losses. That is the current form of Lampard’s side.

Granted, the first match was against a strong Arsenal side who look bolstered by the arrivals of the likes of Gabriel Jesus.

However, the second loss – which occurred on Wednesday – was to MLS side Minnesota United.

Lampard’s lads were on the end of a 4-0 drubbing, putting in a performance which was littered with errors. Emanuel Reynoso opened the scoring from the penalty spot after Tom Davies had handballed in the box.

Following this, Michael Keane scored an own goal to double the lead for Minnesota. Two further goals for the MLS side sealed a commanding win.

When losing 3-0, Alli incredibly missed from just one yard out to sum up Everton’s afternoon.

The midfielder had ghosted into the box and got onto the end of Mason Holgate’s low drive, and somehow he managed to miskick and fire the ball wide.

It really looked harder to miss.