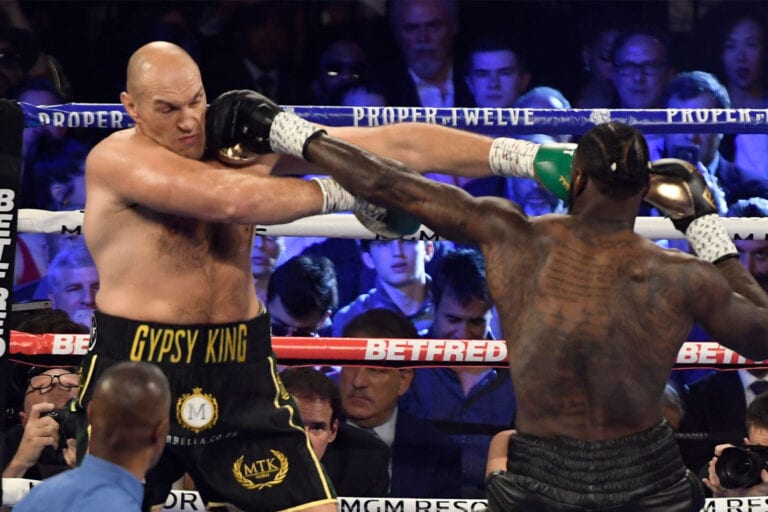 Deontay Wilder has reaffirmed his belief that Tyson Fury cheated his way to victory when the two met for the second time in 2020.

In the aftermath of the defeat, Wilder provided a now infamous list of excuses for that ranged from tainted water to his ring-walk attire being too heavy.

Another thing ‘The Bronze Bomber’ questioned was his opponent’s gloves, which in some clips, appeared to bend unnaturally.

Wilder has now criticised the boxing world for not paying attention to the glove situation in a new clip, in which he also reiterated that he thought his corner had conspired against him.

“You can’t not see that!” He said on Fury’s gloves.

“Gloves do not bend. Your wrist cannot bend, unless you’re double-jointed or something – how’s it going to bend at a 90-degree angle?

“It [a boxing glove] doesn’t have loose space in it; it’s impossible.”

Mark Breland was the man responsible for throwing the towel in during the seventh round, a decision that was generally deemed the right one among pundits and fans alike.

Later in the clip, Wilder brings up Fury’s past drug troubles.

“He’s got a rap sheet of cheating, he’s got a wrap sheet of abusing drugs,” he says. “Whereas you talk about a guy like me – that ain’t got no rap sheet, just pure power, pure work ethic, but I’m lying? And you’ve got a guy that’s known for cheating, and he’s telling the truth?”

Both men are set to complete their trilogy on July 24, with fans then desperate to finally see Fury meet Anthony Joshua in what would be one of the biggest fights in British boxing history.