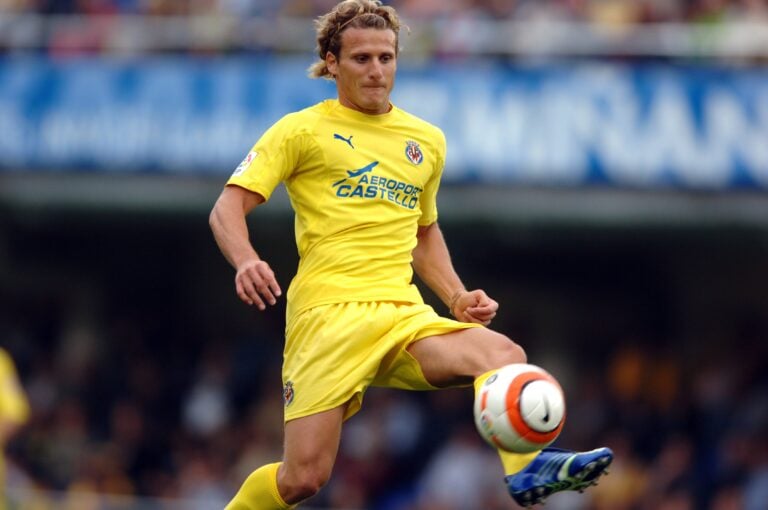 Diego Forlan has explained why he believes Villarreal perform well against Manchester United.

The two sides face off in the Champions League tonight, with Villarreal hosting the clash at Estadio de la Ceramica.

The winner of the game, which kicks off at the early time of 5:45pm UK time, will end the evening on top of Group F. In United‘s case, a win would ensure progression to the last 16 stage.

However, standing in their way is a Villarreal side that played excellently in the reverse fixture at Old Trafford. The ‘Yellow Submarine’ took the lead on 53 minutes after dominating the first half. However, Alex Telles’s equaliser and a stoppage-time winner from Cristiano Ronaldo consigned Unai Emery’s side to defeat.

That was the first time the Spanish outfit had lost to United in six meetings. All four of their previous Champions League clashes ended with the same scoreline – 0-0.

Their last meeting in any competition was last season’s Europa League final. Villarreal won through a tense penalty shootout to lift the trophy after the game had finished 1-1 after extra time. It was the first major trophy the club had ever won – although they were one of three winners of the 2003 and 2004 Intertoto Cup.

One player who knows all about both clubs is Diego Forlan. The Uruguayan forward spent two years with United between 2002 and 2004, before transferring directly to Villarreal.

Speaking to LaLiga ahead of the game, Forlan was asked for his thoughts on why Villarreal normally play well against their next opposition.

He replied: “Yes, they have some good results against them, but last game they lost. Of course, the record is more positive than negative.”

“I think it’s a good team, with good players, and they know they’ve got the advantage of being a small team, and they’ve got nothing to lose. They play, and they try to enjoy it – I think that might be the reason.”

Forlan made the move to England from the Argentinian side Independiente in 2002. With the Red Devils, he struck 10 goals in the Premier League.

Two of those goals were in a 2-1 win over Liverpool in December 2002, with both strikes just three minutes apart. He netted six times as United lifted the 2002/03 Premier League title.

Forlan scored four goals in the 2003/04 season before leaving the club to transfer to Villarreal.

The Uruguayan forward powered Villarreal towards achieving Champions League qualification for the first time in their history in 2005. His 25 La Liga goals earned him the Pichichi Trophy for most goals scored that campaign, and he netted a hat-trick in an incredible 4-4 draw against Barcelona in May.

He had a lean season in comparison the following campaign, netting only ten goals in 32 league appearances. But after 19 goals in 2006/07, Forlan moved to league rivals Atletico Madrid where he would spend four years, winning two European titles and another Pichichi Trophy in 2008/09.

How does Forlan reflect on his time in La Liga?

Forlan spent a total of seven years playing in La Liga between 2004 and 2011. He looks back particularly fondly on his time at Atletico.

He explained: “I have a lot of memories of playing for Atletico Madrid. They have very passionate fans and it was great, although we had some difficult times as well.”

“But we enjoyed those years when we scored so many goals and played well. To win the 2010 Europa League after so many years without winning anything was something I’m grateful for.”