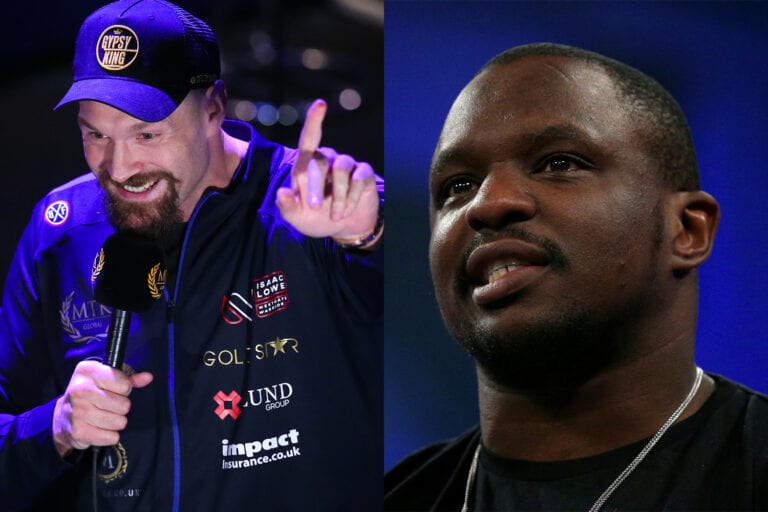 Dillian Whyte has named his top five heavyweights in the world of boxing – with WBC heavyweight champion Tyson Fury coming out on top.

Whyte was speaking during an Instagram Live, in which he rated his professional peers.

The 32-year-old got his career firmly back on track on Saturday when he defeated Alexander Povetkin in Gibraltar, winning the WBC interim heavyweight title in the process.

It was a dominating performance from Whyte, who knocked out Povetkin in the fourth round.

Before that victory, the Brit declared who he felt are the current top five heavyweights in boxing:

Andy Ruiz Jr. pulled off one of the biggest surprises in recent boxing history when he defeated Anthony Joshua in June 2019 to win the unified heavyweight titles.

It was without doubt the performance of his professional career in terms of status. And whilst he would go on to lose his titles to Joshua in a rematch six months later, Ruiz had already put the boxing world on notice.

He has not stepped into the ring since that night in December, but his scheduled fight against Chris Arreola this May will give him the opportunity to further back up his credentials.

Deontay Wilder was the reigning WBC heavyweight champion for five years between 2015 and 2020.

He hasn’t fought since losing to Tyson Fury in February of last year, but is still renowned as one of the most dangerous fighters in boxing.

Wilder once told TMZ that he was the hardest-hitting puncher in boxing history. He had previously knocked out every fighter he had fought against – until Fury.

Whyte wasn’t able to name a top five without including himself on the list.

And with good reason, plenty might say. Whyte’s performance against Alexander Povetkin on Saturday was that of a boxer who knows he can mix it with the very best.

Now he is desperate to be given that opportunity.

Joshua and Fury may be booked up in the coming months, but a fight against Deontay Wilder may be on the cards.

Promoter Eddie Hearn called it a “stadium fight“. Will we see the pair face off this year?

Whyte has first-hand experience of Joshua’s talents inside the ring, having fought him in 2015.

Joshua won that night via technical knockout in round seven to retain his heavyweight championships, and subsequently went from strength to strength.

The Ruiz Jr. fight is one blot on an otherwise successful copybook. It was considered as one of boxing’s biggest upsets, with Joshua a massive odds-on favourite prior to the bout.

But Joshua exacted revenge by claiming his titles back from Ruiz in a dominant performance six months later. Tyson Fury now awaits.

Whyte chose Fury as his number one heavyweight in professional boxing.

He is the only unbeaten fighter on Whyte’s list, with 30 wins and a draw out of 31 professional fights.

Fury’s victory via technical knockout over Wilder was one of his finest displays.

His unification fight against Joshua later this year is one of the most highly-anticipated bouts in boxing history, and will see, in the vast majority of people’s eyes – including Whyte’s – the two best heavyweights in the world face off.